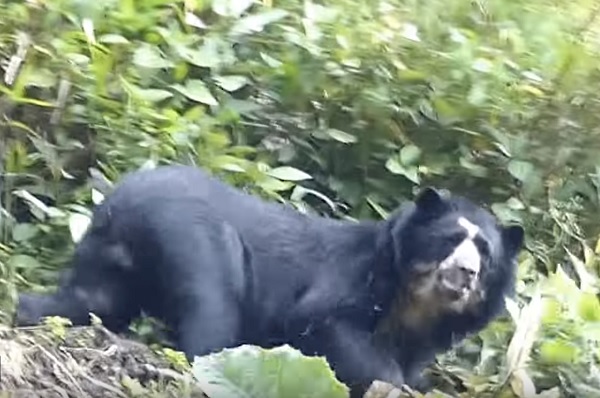 Lou Jost, co-founder of Fundación EcoMinga, said “This year we have been thrilled to see a dramatic increase in Spectacled Bear sightings around the ‘Forests in the Sky’ wildlife corridor between the Llanganates and Sangay national parks.

“We have been protecting these bears and their habitat for ten years now, and apparently we have been quite successful.”

Spectacled Bears and the local community

The increase in Spectacled Bear sightings has had a mixed reception within the local community that EcoMinga works alongside. In March, EcoMinga posted a video filmed by one of their rangers of a bear near his home town of El Placer, close to the Naturetrek Reserve. The bear passed the local schoolhouse and caused great excitement for the students.

“However, this brings new challenges as bears and people begin to compete for the same food,” Lou Jost adds. “As one example, bears love the corn that the local people grow, and they can systematically destroy a farmer’s crop, as we showed in this camera-trap video.”

Fundación EcoMinga is also concerned about reports that Spectacled Bears are taking young livestock, which could cause conflict between the community and conservationists. Currently EcoMinga’s rangers are talking with local people to investigate the authenticity of these reports; they are also considering how best to mitigate potential conflict between bears and the community and are exploring ways in which the community might even benefit from their increased presence.

“If the bears came often enough, it may be possible for the village to earn some money from tourism. Then they may be able to overlook the lost corn and chickens, though cattle are so valuable that no one can accept losing them.”

Fundación EcoMinga’s rangers are hired from the communities surrounding the reserves, and their work is essential for the protection of wildlife and involvement of the local community. Their insight into the needs of local people and role as conservation ambassadors is essential for EcoMinga to continue its work, involve local people and reduce human-wildlife conflict.