I have known Roger since the late 1970s. When he died suddenly in June 2017, he left a chasm in my life which will never be filled. Roger was an exceptionally innovative person and one of the most experienced, practical conservationists of his generation. He travelled the globe, and his professional experiences ranged from island bird conservation in the Indian Ocean to Mountain Gorillas in Rwanda; from the forests of Belize to the Gran Chaco of Paraguay; from the Falkland Islands to the Philippines and many more. His career included working for the big foreign aid programmes, including the EU, as well as large conservation bodies such as The Nature Conservancy. But he was in his element when working with smaller organisations, where he could develop his unique style of pioneering and effective conservation, creating new models for future generations. For the past decade he brought his incredible skills to World Land Trust (WLT) and led our conservation programmes.

I first met Roger Wilson when I employed him in 1981 to run the Mountain Gorilla Project (MGP) in Rwanda, which had been started by the Fauna and Flora Preservation Society. Roger and his wife Regine met in the Seychelles, and they moved to the edge of the Parc de Volcans to take over the relatively new MGP. One of Roger’s unique abilities was getting ‘under the skin’ of local communities. I can vividly recall sitting with Roger, drinking home-brewed palm beer in a thatched hut, finding out about the villagers’ attitudes to gorillas and other wildlife. The MGP has since grown and is now considered one of the most successful species conservation programmes in recent history, providing significant income to the countries involved.

Not many years later, WLT’s first project, Programme for Belize (PfB), was in need of support. PfB’s Director asked if WLT could supply a technical advisor, who could not only help with developing the conservation strategy, but also develop grant applications. We hired Roger on a one-year contract. He was so successful in this post that one year led to several years of work in Belize. With Roger’s steady hand working alongside the Director, Joy Grant, PfB became self-supporting. This was characteristic of Roger’s modus operandi as a great negotiator and he was always happy to let others do the fronting and even take the credit. He realised that in developing countries it was absolutely essential that the old colonial model of conservation was discarded, and that local conservationists and administrators were empowered. One of his conditions of being employed by WLT to work in Belize was that, while we paid his salary for the first two years, he was responsible to the Director of the local NGO – Programme for Belize (PfB). His successes in Belize included establishing one of the very first carbon offsetting programmes, before even the Kyoto Agreement had been established.

Following his spell with Programme for Belize, Roger worked as a consultant, mostly in West Africa, often on EU and similar foreign aid projects. From that period, there is a wealth of experience and knowledge that we all hoped one day Roger would write up – he had a unique sense of humour and many of his experiences and anecdotes are hilariously funny. Perhaps the most famous was Roger recounting how in Burkina Faso he was losing weight, in poor health and not enjoying the local campfire cuisine. So the local chief ordered the villagers to cook him a special meal: an eagle, boiled (with all its feathers on) with a Maggi Cube (everything apparently was cooked in this way) and the meal was dressed with mouse sauce (the mouse had been pounded to a paste in a mortar and pestle).

In 2008, WLT was growing, and it was clear that I could no longer manage the conservation aspects of our work as well as being CEO, so Roger joined the team again. Over subsequent years with WLT his title changed – at times he was Head of Conservation at other times Director of Special Projects. But we knew that meant Roger doing what Roger was good at: mentoring and innovation. As he had already initiated a carbon offset project in his days at PfB, he was ideally suited to developing the new Carbon Balanced programme. The incredible success of projects in Paraguay and (more recently) Vietnam are testimony to his vision and his understanding of the aspirations of the local communities.

Roger and I shared many interests, both as field naturalists, but also, surprisingly, in literature and films. I will miss not being able to swap bizarre ‘bad movies’ like Coffin Joe (Brazilian Horror movies), Italian Giallo films, or South American magical realism novels. We both enjoyed eating local weird foods and drink; there was even an element of food twitching – which Roger always won hands down with all the insects and crustaceans he had eaten in his travels.

But, perhaps my most abiding memory of Roger will be that of many of his close friends and colleagues: sitting long into the night over a whisky or rum talking about work, talking about wildlife and occasionally what we had been reading. Unfortunately it also, in Roger’s case, involved smoking and ultimately cancer caught up with him. When Roger found out his response was typical: “What should I expect after over 50 years of treating my body like this?” But Roger was receiving treatment and the outlook was positive, so his unexpected death was a blow to all of us.

I have kept my reminiscences strictly to my direct contact with him. There were many other facets to his work and personality; despite what appears to be a gregarious career Roger was also an intensely private person and we will all have very different memories. We will be celebrating his life and achievements at an event to be held in early September.

In nature, critical moments and specific conditions allow life to burst into existence. In Ecuador´s dry deciduous forests, for example, the seeds of the guayacán tree can only germinate within 20 to 30 days after maturing and falling to the forest floor.  If the yearly rains do not arrive on time, millions of seeds die.  Fortunately, many rural Ecuadorians have learned to harvest these seeds at the precise time in order to propagate them and restore the forests near their homes.

We met Roger Wilson when Nature and Culture International (NCI) was working to protect key areas of dry forest and Amazonian rainforest in southern Ecuador.  With the support and knowledge of local populations, we also began a project to restore abandoned pasture lands in these ecosystems. We met Roger and his fabulous colleagues from World Land Trust (WLT) UK at the perfect time.  With Roger and    WLT´s support and partnership, these projects have taken shape and grown strong.

The experience, pragmatism, and above all, the respect that Roger passed on to us always arrived at the quintessential time.  Conservation needs dedicated and inspiring figures like Roger.  We at NCI grieve his untimely departure.

The guayacanes we planted, Roger, not only have taken root, but are flourishing.  Our everlasting gratitude to you, friend. 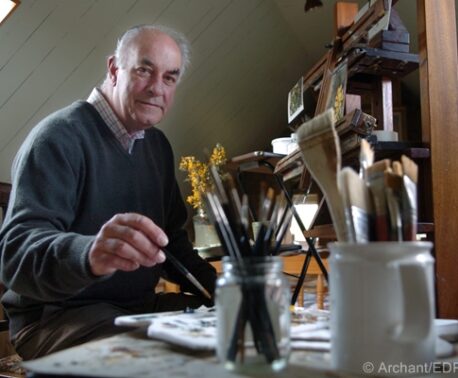