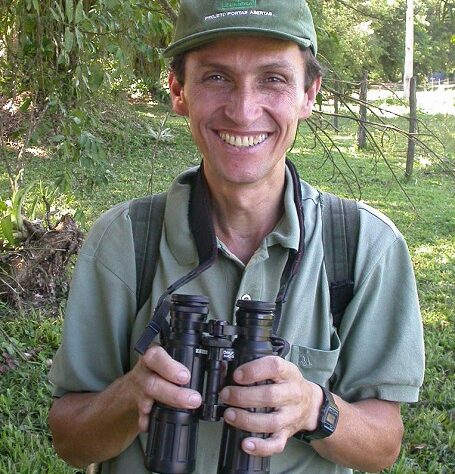 World Land Trust’s (WLT) partner in Brazil, Reserva Ecologica de Guapiaçu (REGUA), is saying a heartfelt goodbye and thank you to their ranger Antonio Nunes, who has been a Keeper of the Wild since the programme began.

Antonio will be retiring at the end of the year, and his Keeper of the Wild badge will be passed onto REGUA’s forest ranger Rildo da Rosa.

Antonio has been incredibly proud to work at REGUA. He is one of eight children who were raised by his parents with a strong work ethos, working on the family land to grow bananas, manioc, yams and beans. They had no electricity, so the children would collect wood from the forest from the kitchen stove, and use candles and kerosene lamps at night.

When Antonio became a ranger at REGUA, he became involved in the reforestation programme and learned about the effects of logging on the habitat.

Patrolling the forest has taught him about the species which benefit from the restoration projects, and made him a passionate ambassador for conservation in the local community. He has been lucky enough to observe some of REGUA’s endangered species, such as the Woolly Spider Monkey (Muriqui) which he first observed a few years ago feasting on fruits in a group of four in the forest canopy.

Rildo was also born into a large family who were self-sufficient in their food production, not far from the Olympic Forest Reserve. Like Antonio and several others of REGUA’s rangers, he was a hunter who stopped when he was employed by REGUA.

Speaking to REGUA co-founder Raquel Locke, he says (translated) “I am embarrassed about my hunting past. Working for the protection of this forest and its species has changed my life, and I am proud to call myself a custodian of the forest and defender of all the animals within it.”

Rildo says that over his time working at REGUA so far he has noticed how the project has affected species recovery in the Atlantic Forest. He now regularly sees peccaries, howler and capuchin monkeys, agouti, paca, armadillo, and sloth, which used to be very difficult to observe in the wild.

World Land Trust joins REGUA in thanking Antonio to his years of committed work for the conservation of Atlantic Forest, and welcomes Rildo to the Keepers of the Wild team.

Find out more about the Keepers of the Wild »