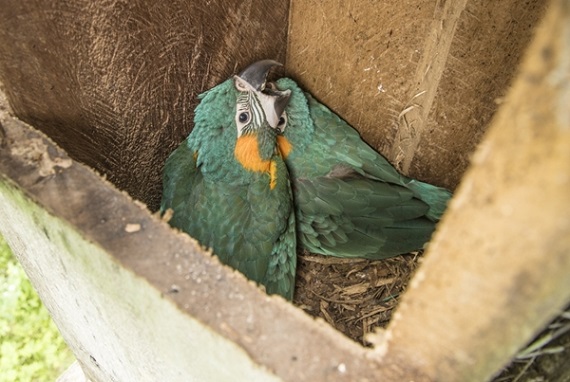 World Land Trust (WLT) partner Asociación Armonía have reported a piece of good news for the conservation of the Critically Endangered Blue-throated Macaw of Bolivia. Nine individuals have successfully fledged from their nest box program this year, including the first individual to be raised by parents who were born in the nest boxes.

Asociación Armonía are invested in the protection of these highly threatened birds, as there are less than 250 estimated to still exist in the wild. Gustavo Sánchez Avila, coordinator of the Blue-throated Macaw conservation program, says “After eleven breeding seasons a total of 71 Blue-throated Macaws fledged from our nest boxes.

“Given that estimations of this species population indicate there are less than 250 mature individuals left in the wild, the impact of Armonía’s conservation actions is significant.”

One of the nine chicks to have fledged from the nest boxes this year is the first record of a second generation of Blue-throated Macaws being bred in the nest boxes. Both parents of this chick fledged from Armonía’s nest boxes seven years ago, and have returned to raise their own offspring.

Due to habitat loss, there is a shortage of nesting cavities for the macaws and learning to use the nest boxes is an important step in the survival of this species.

Bennett Hennessey, Development Director of Asociación Armonía, says “Macaws are intelligent birds and much of their behaviour is learned from their parents. We are confident that once a macaw pair breeds in a nest box, their offspring will learn this behaviour.”

The WLT Action Fund has been supporting Asociación Armonía’s conservation program for the macaws through reforestation of Blue-throated Macaw feeding habitat.