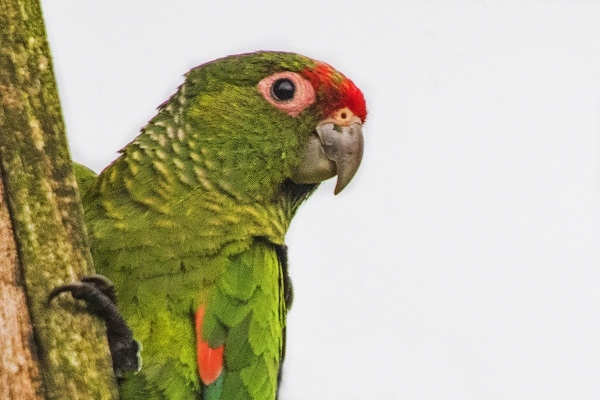 The properties purchased will extend the Buenaventura reserve on the western slopes of the Andes, which is the only protected area in the world for the Endangered El Oro Parakeet and an important foraging area for the Endangered Grey-breasted Hawk.

The first property was 68 acres (28 hectares) and was acquired in January 2017, the second 31 acres (12 hectares) in March. With these extensions, the protected area of Buenaventura Reserve now equals 6,363 acres (2,575 hectares).

“I am very grateful that ABC and WLT assisted Fundación Jocotoco in purchasing critical habitat to expand Buenaventura,” said Martin Schaefer, Jocotoco’s Executive Director. “This reserve protects a unique mix of semi-humid to very wet montane forest, and is the only protected area in this region for 15 globally threatened bird species, including the El Oro Parakeet, Long-wattled Umbrellabird, Pacific Royal Flycatcher, and the very rare El Oro Tapaculo.”

In spite of its eye-catching colours, the El Oro Parakeet managed to elude discovery for many years. The species was first discovered in 1980 and only officially described in 1988. Threats to these birds include habitat loss and fragmentation. Many suitable nesting trees are harvested for building materials and cut down to create cattle-grazing pasture, practices that which have been shown to limit parakeet populations.

Conservation efforts on the parakeet’s behalf at Buenaventura are producing results. The breeding season has just ended, and Jocotoco’s monitoring results conclude that at least 55 El Oro Parakeets have fledged from 22 artificial nest boxes installed at the reserve.

WLT’s Action Fund will continue to support important land purchases for the protection of endangered species with your generous support. The dedication of WLT Friends, who give a monthly donation to the Action Fund through Direct Debit, make WLT’s commitment to these projects possible.

Find out more about becoming a WLT Friend »