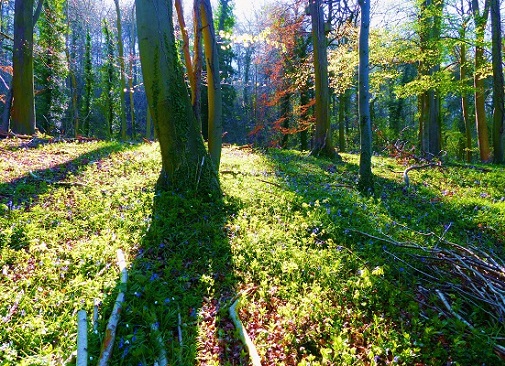 Since our first project in 1989, the purchase of 110,000 acres (44,515 hectares) in Belize, WLT has funded the creation of reserves all over the world. An abiding part of WLT’s philosophy is always to work through local partners who have the expertise in their own countries, and ultimately the land ownership is vested in them. The one exception to this has been Kites Hill Reserve, our only UK-based project and the only reserve owned by WLT.

The Kites Hill Reserve came about due to the foresight and generosity of Jane Pointer, who was one of WLT’s first supporters 28 years ago. I first met Jane when she joined the tour we organized to visit Programme for Belize in 1991. I led the tour, and I vividly recall persuading Jane, who had been a keen horse rider many years before but hadn’t ridden since, to experience the reserve on horseback. She did so, going on a ride with me on the sturdy quarter horses living on the neighbouring property at Gallon Jug (pictured, Jane is second right). Not only did she thoroughly enjoy her ride, but she fell in love with the forest we were aiming to protect.

Belize had a profound effect on Jane and on her return to England she decided she wanted to do as much as she could for the future of wildlife. She continued to support WLT and a few years later she donated her land in Gloucestershire to WLT. These 40 acres, with important Beech wood (which is a Site of Special Scientific Interest), became known as Kites Hill Reserve.

Over the years WLT has used Kites Hill to demonstrate in the UK what our partners are able to achieve in other parts of the world. The reserve is managed in partnership with The Conservation Volunteers (TCV), and over the years habitats have been restored and enhanced for the benefit of local birds, mammals and invertebrates.

By making a Living Legacy Jane was able to see everything that happened there during her lifetime, and as her enthusiasm for WLT continued, she let us know that the Trust was included in her Will. In January 2014, Jane passed away after a short illness, leaving her stocks, shares, and the value of her house to WLT. This wonderful legacy is being used in part to create the Jane Pointer sector of the El Pantanoso Reserve in Argentina.

I would like to end with a cautionary note: if you are thinking of leaving a legacy to WLT please do use a solicitor, as if the Will is not watertight administration can take many years and sometimes without the outcome that was intended.

Thinking of leaving a legacy with WLT projects?

Speak to your solicitor and contact WLT for more information.