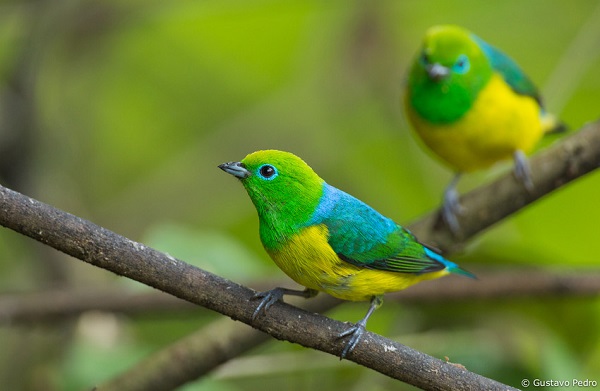 The Olympic Forest Reserve in Brazil is flourishing under the protection of Reserva Ecologica de Guapiaçu (REGUA), reports the REGUA team after a field trip into the Atlantic Forest.

Last year, World Land Trust (WLT) supporters helped us to exceed the £40,000 target to purchase and protect 221 acres (89.5 hectares) of Atlantic Forest, which was named the Olympic Forest Reserve after the Rio 2016 Olympics and championed by gold medallist Helen Glover.

“The Olympic Forest almost takes Olympian effort to reach as it is high on the ridgeline above the Guapiaçu valley,” REGUA Communications Volunteer Sue Healey told WLT. “From the point where you can get a vehicle it is another good two hour hike sometimes through dense forest with no paths, and without a guide you might easily lose your way.

“As it was a late autumnal morning when we arrived, many species were quiet but as we approached the Olympic Forest there was a noticeable change in the composition of the tree species with a far deeper leaf litter, more old trees, and only the occasional evidence of previous logging activities with rotting sawn stumps, and fallen trees.   The forest air was cooler too, a great relief as we continued to climb.

“It felt as if no-one had been there for many years, and it was a real privilege to visit.”

Overcoming past and present threats

It is important to conserve the high altitude forests in these areas, Sue added “This area was a hive of activity 40 years ago as farmers cut down the forests for planting bananas, coffee and yams.”

REGUA co-Director and Founder Nicholas Locke explained that the soil became rapidly exhausted, decreasing the work opportunities in the towns, contributing to the slow abandonment of these areas, allowing the forest to recover. “Today the threat is from hunters and the construction of holiday homes by those who cannot bear their lives in the city and want to hear the call of songbirds, the fresh air and gentle streams.”

But the Olympic Forest Reserve is protected from such construction and showed no visible signs of hunting during the visit, demonstrating that REGUA’s protection through ranger patrols (including one WLT supported Keeper of the Wild) is effective.

Follow Nicholas Locke through the forest to the Olympic Forest Reserve in the video below:

The Atlantic Forest is one of the world’s most endangered ecosystems, with only 7 per cent of its original range across the Atlantic coast of South America remaining. In addition to 2016’s Olympic Forest appeal, WLT also support REGUA’s restoration work through the Plant a Tree programme and the long-term protection of reserves such as the Olympic Forest are supported by the Keepers of the Wild, the rangers who patrol the reserves to prevent logging and poaching.