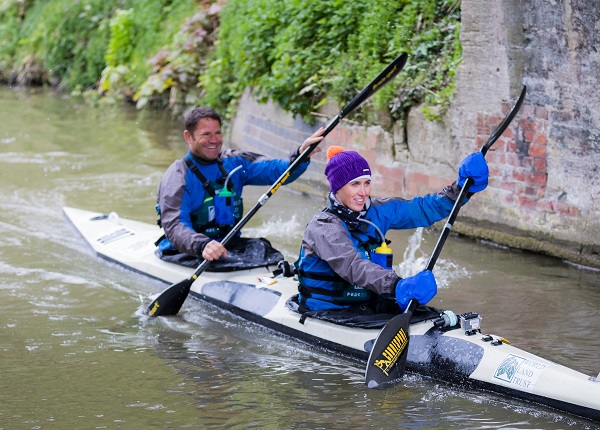 After weeks of hard-core training and tireless fundraising, Steve Backshall and Helen Glover completed the Devizes to Westminster International Canoe Race (DW) in 22 hours and 48 minutes, winning the mixed team category, over the Easter weekend.

Steve and Helen competed in the race to raise funds and awareness for World Land Trust’s (WLT) ‘Saving Kinabatangan’ appeal, for the urgent purchase of rainforest in Borneo before it is deforested for plantations.

With multiple interviews and television appearances (including Good Morning Britain and The One Show) as well as continuous training updates and interaction with supporters on their social media accounts, there has been a phenomenal response to their fundraising mission, and the appeal has received hundreds of donations in the past week. This response includes incredible stories of individuals inspired by the couple’s mission, such as 14 year old George Earnshaw’s total of £1,550.

Getting through the night

The DW Race is known as the ‘Canoeist’s Everest’ due to its reputation within through the canoeing community as a demanding challenge of strength and stamina. As well as kayaking 125 miles non-stop through the night, the race also involves carrying the kayak around 77 locks.

In a video posted to Steve’s Twitter account just after the race, Steve said “We did it! It took us about 22 hours and 50 minutes, and it has been incredible. We just wanted to say a massive, massive thank you for all your support.

“There have been people turning up all the way through the night- my local Scout troop turned up at a lock at 1 o’clock in the morning! There were people cycling alongside us on the canal path, everywhere we’ve been people have been cheering and it’s just meant everything to us.”

“The biggest thank you has to go to all those people who have donated because in the middle of the night, when we truly didn’t think we could do this and complete this challenge, it was you guys who got us through”
Helen Glover

Helen added “The reason we were doing all of this was to raise money for Bornean Rainforest, and so the biggest thank you has to go to all those people who have donated because in the middle of the night, when we truly didn’t think we could do this and complete this challenge, it was you guys who got us through, so we thank you so much.”

John Burton, Founder and CEO of WLT says “Steve and Helen are truly incredible ambassadors for WLT. Before this, Steve competed in the DW race to fundraise for one of our projects in Colombia, and last year Helen’s support was instrumental in securing the Olympic Forest Reserve in Brazil, where the fundraising target was actually exceeded.

“But together, they have really outdone themselves for Borneo. The response we had after their interview on The One Show exceeds any donation response we’ve ever had in one night for such an appeal, and almost all of the donations were from new supporters. To them, and all our continuing supporters, we say a huge thank you for showing support for Borneo and Steve and Helen’s ‘Canoeists’ Everest’.”

WLT’s Donations office has been incredibly busy processing donations, which are still flooding in from Steve and Helen’s supporters through the website, PayPal and text donations. The total is being updated daily on the Backshall’s fundraising page as the donations are being processed, and we are closing in on their £100,000 target.

Please donate to the Saving Kinabatangan appeal if you have not already to help us protect a vital piece of Bornean Rainforest habitat.

And finally, enjoy this video of a territorial swan who isn’t aware Steve and Helen are trespassing through his river to save wildlife:

Thanks to No Limits Photography for donating the photos above.