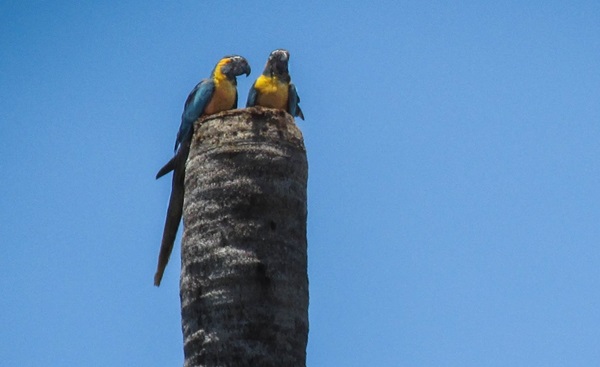 A new nesting location of Critically Endangered Blue-throated Macaws has been discovered, following an expedition led by Asociación Armonía, WLT’s partner in Bolivia.

These birds, whose wild population has been devastated by the pet trade, have been seen in large groups roosting and feeding within Armonía’s Barba Azul Nature Reserve, but they do not nest in the protected area. Where they go during the breeding season (November to April) has always been a mystery.

A quest for the Blue-throated Macaw

Further south, in Loreto, Armonia has had great success in encouraging Macaws to use specially designed nest boxes but so far this approach has not worked in Barba Azul, highlighting the need to better understand and protect the full life cycle of this population. So this year, Armonía teamed up with the American Bird Conservancy and The Cincinnati Zoo in a quest to find the nesting sites of the Barba Azul macaws.

The expedition was led by Tjalle Boorsma, Barba Azul Nature Reserve Manager, on horseback through the wet wilderness of the Beni Savanna. They began by focusing on the Motacú palm forest islands in the area where 15 birds had been found roosting north of the reserve last year, but initially they only found Blue-and-yellow Macaws.

But then their luck changed. “The breakthrough happened when we sighted a pair of Blue-throated Macaws flushing from an elongated patch of Royal Palms” said Tjalle. “The discovery gave a new scope to the whole expedition.”

The area was completely flooded and difficult to access, but Tjalle wanted to be sure of what they had seen, so he concealed himself in a makeshift palm blind and waited for six hours and was then rewarded when he observed the pair returning to their nest.

Further exploration revealed four nests in the area in Totaí and Royal Palms, which is important information for the conservationists trying to protect their nesting habitats, said Tjalle. “Finding the nests in Royal Palm and Totaí delivered the missing piece to complete our investigations. Now we definitively know that the Blue-throated Macaw prefers Totaí and Royal palms to nest in, as dead palm snags provide excellent vantage point to observe their surroundings.”

Conserving the Barba Azul population of these Critically Endangered birds has become an excellent example of conservation organisations from around the world working together. As a land conservation organisation focussed on habitat protection, WLT supports these efforts by funding restoration of forest islands which provide the birds with the Motacu Palm nuts which make up most of their diet.

To support this project, please donate to the Action Fund below.