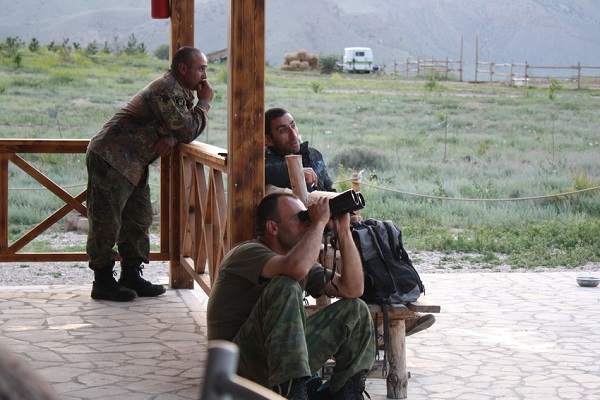 I have just spent a week in Armenia with Dr Emma Gilberthorpe from the University of East Anglia (Norwich). Emma is in the Department of International Development, and the purpose of her visit was to follow up on an idea that I developed last year with Rafik Andreasyan, Mayor of the Urtsadzor community cluster.

In discussions with the Mayor it became increasingly obvious that the projects that World Land Trust (WLT) was funding in Armenia with its partner Foundation for the Preservation of Wildlife and Cultural Assets (FPWC), were not simply protecting wildlife, but were also having major economic benefits for some of the most deprived and poor communities in rural Armenia.

Initially sceptical about the role of wildlife conservation, the Mayor was finally persuaded to lease community land owned by the village of Urtzador, in the buffer zone of the poorly protected Khrosov National Park. The funds paid for the lease were used to benefit the entire community – in the first instance, a school that had become very run down after the collapse of the USSR was completely refurbished, followed by other community benefits such as LED street lighting.

Next, young men from the village were employed and trained as rangers, providing the almost only paid employment in the village for young men– most of the others have to leave the village and go to cities, even as far as Moscow.  Another initiative of FPWC was helping poor villagers install bathrooms and upgrading bedrooms, together with basic hospitality so that they could provide welcoming homestays for tourists.

By the time I visited the village last year the Mayor, who brandishes a moustache worthy of any heroic Armenian revolutionary, was such an enthusiastic supporter of FPWC’s work that he was encouraging other villages to join in and lease their land for conservation.  We sat over morning coffee, while Rafik was halving apricots for drying (Armenian fruits and nuts are among the finest in the world). The discussion moved on to the success of FPWC’s work in his village and how other mayors were coming to him and asking how they could get involved.

As a result of these discussions we decided it would be beneficial to carry out a thorough study of the impact of wildlife conservation on the prosperity of the villages. On my return I went to UEA (where I am a Visiting Fellow) met with Dr Joel Clovis, a Lecturer in Economics (who had previously supervised a study on the economic impact of the WLT office on Halesworth, where we are based in Suffolk) and Emma (who had previously carried out social anthropological studies for WLT in Zambia).

They were enthusiastic about involving the university, and the end result of our discussions was planning a site visit to Armenia to carry out a feasibility study.  Emma and I visited Yerevan, the capital of Armenia, and were able to establish contacts with key stakeholders in our project.  We encountered amazing enthusiasm, offers of help and cooperation, that Emma is now designing a project which will involve sociologists from Yerevan State University, the national Statistical Office, as well as our partner Foundation for the Preservation of Wildlife and Cultural Assets (FPWC). And of course we met with the Mayor, Rafik.

As well as introducing Emma to Rafik, she also saw for herself some the social benefits that have been provided as a result of the villagers’ involvement with nature conservation. We visited homestays, and attending the switching on of street lighting in a village high in the mountains by VivaCell-MTS (a corporate partner of FPWC), where it is hoped that the street lights will also deter marauding bears and wolves.

Everywhere we went, we were greeted with warmth and enthusiasm. The model created by FPWC may not be totally replicable everywhere in the world, but as we hope the UEA’s study will show, there are numerous elements which are certainly replicable, and could show entirely new ways of preserving large areas of land for conservation.

“The key to the success appears to be how and when the local community are involved, and ensuring they receive benefits from conservation projects.”
John Burton

The key to the success appears to be how and when the local community are involved, and ensuring they receive benefits from conservation projects. On a previous visit we had been saddened to see a project which had been established by a different international conservation charity, one which had received substantial funding; but the project had clearly failed to achieve long-term protection for the wildlife, as there was direct evidence of poaching just behind their ‘protected area’ sign.

The failure seemed to indicate that the involvement of the local community, which FPWC does with every step, may be crucial to ensure the success of conservation projects, particularly in this area. But let’s see what the study finds out.