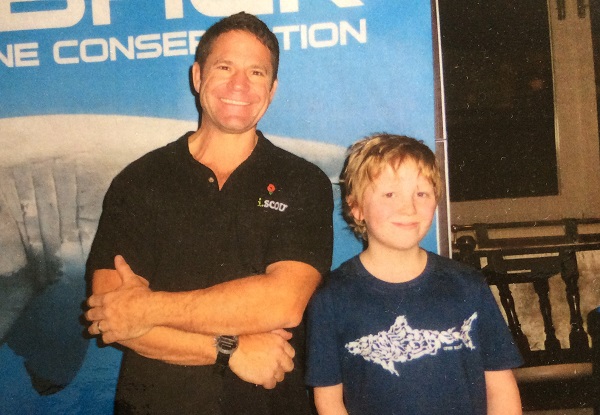 Update 9 May 2017: George Earnshaw has now raised a total of £775, which has been matched by another WLT donor, Kamila Zahno, altogether donating £1,550 to the appeal.

Steve had been 14 year old George’s inspiration for some time, as he shared his enthusiasm for the natural world, and George was lucky enough to meet Steve on his ‘Wild World’ tour last November in Blackpool.

After George raised £600, Steve posted a video on his social media especially for George, personally thanking him for making such a big difference “We are absolutely blown away. To raise that much money is just amazing. If I’d had your motivation at your age, goodness knows where I’d be right now.”

In the final stretch of their training, two days before the race, Steve and his wife (and kayak partner) Helen Glover posted another video for George, with Helen saying “You’ve done such an amazing job, and when we start kayaking on Saturday, you’re going to be on our minds because every time we’ve seen that you’ve raised a bit more money it’s kept our spirits high.”

Inspired to make a difference

George’s mother, Lesley Earnshaw, runs a Twitter account for the two of them which they use to keep track of wildlife news. They spotted Steve Backshall and his wife Helen Glover’s ‘Saving Kinabatangan #Race4Borneo’ fundraising mission on their Twitter feed, and George decided to ask his family for donations instead of Easter Eggs, and his friends to donate a ‘golden nugget’ to the cause if they could.

George tells WLT it just grew from there “After just two days I had raised £50! I got the support of my school and they allowed me to ask my classmates for their help and supported me in my year assembly.

“My mum and dad asked the people who they worked with for help and I wrote to neighbours and family. My school also let me run a ‘Name the Orang-utan’ competition at lunchtimes to raise more. After four weeks, I was able to donate £700 to the cause.”

Steve and Helen successfully completed the 125 mile Devizes to Westminster Canoe Race on Easter Weekend, and donations are still coming in for the Saving Kinabatangan appeal, which is nearing their £100,000 target thanks to supporters like George Earnshaw.

From patrons like Steve Backshall, to conservationists of the future like George, at WLT we are consistently overwhelmed by the passion and dedication of fundraisers who become the best ambassadors WLT could hope to have supporting wildlife conservation around the world. For more information about how you could become a WLT fundraiser, click here.