Mother and daughter raise more than £2,000 walking 300 miles around the UK SEARCH NEWS 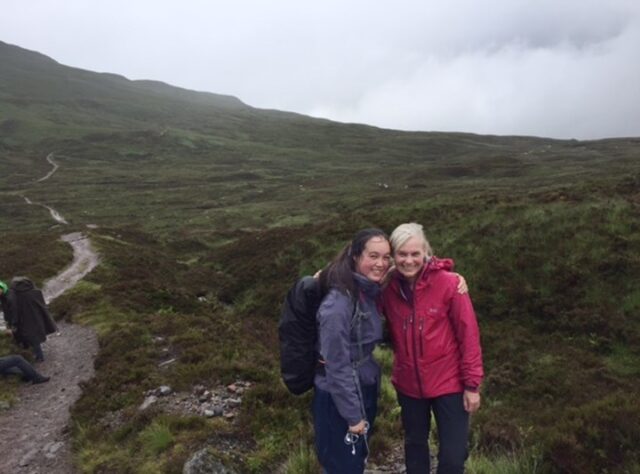 A mother and daughter from World Land Trust’s native county of Suffolk have raised more than £2,000 for wildlife conservation by walking over 300 miles around the UK.

When 14 year old Arabella Woo, who attends Downe House School in Berkshire, told her mother Wendy Woo Lake that she wanted to spend her summer holiday walking around Britain, Wendy thought it would be an excellent opportunity to fundraise for her favourite charity.

“Arabella planted the seed, and when she said she wanted to walk I just thought ‘yes!’” Wendy told WLT, who has been trying to pass on her love of hiking and the outdoors to her daughter since she learned to walk. “I guess I decided to fundraise for WLT because I’ve always loved conservation, and I wanted to do something towards it. I can’t work there because I don’t have any skills which would fit (I trained as a home birth midwife), but at least I can raise money, which I think is a worthwhile contribution.”

Arabella planned the walks, which added up to 300 miles over 21 days spread over the summer trekking the Suffolk Coast Path, Norfolk Coast Path, South West Coast Path and The West Highland Way.

Apart from occasionally getting lifts from Arabella’s father, they had no support crew, so some of the walks required meticulous planning and timing, “Arabella had to figure out how to get the timings right for the buses, so we’d have to park the car where we were going to end up, then get a bus to where we wanted to start and walk back. It’s quite tricky, and in fact it’s almost impossible in Suffolk because the buses have got to wind so far back and forth with the coast.”

There was one stretch of coastline on the South West Coast Path which they were told repeatedly would be impossible. The day they were to walk 23 miles between Zennor and Sennen in Cornwall, the bus driver stopped to tell them he had just realised what they were planning to do, and there was no way they would make it.

“But we did it!” Wendy says, “I think it was a longer section than people usually do, and it is also very up and down. We actually passed everyone on the walk, only Arabella kept telling me to hurry up, like I was slowing her down.”

Wendy and Arabella have exceeded their £2,000 target and are still receiving donations sponsoring their walk. If you’d like to support Wendy and Arabella’s efforts, you can donate to their page here.

If you are interested in fundraising for World Land Trust, find out more at our fundraising page or contact our donations team.