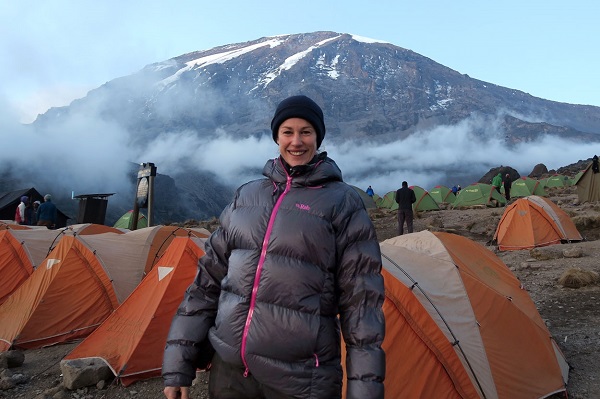 “The surgeon had said I may never walk without pain again but I had to prove him wrong!” Fundraiser Helen Cox’s remarkable climb of Kilimanjaro battled the elements, sickness and injury, but in face of tremendous challenge and adversity, she reached the summit of Africa’s tallest mountain.

World Land Trust (WLT) speaks to Helen about her decision to climb Kilimanjaro and fundraise for WLT despite being diagnosed with Stage 3 osteoarthritis.

Helen is a self-professed adrenaline junkie- her adventures include martial arts, skydiving, caving, scuba diving, bungee jumping and rock climbing. But her future exploits in extreme sports were ruined in 2006, she tells WLT, “I picked a pencil up off the floor and my knee went ‘bang’.”

After a bad recovery to an arthroscopy on her knee, Helen was diagnosed with Stage 3 osteoarthritis. The diagnosis was a horrible blow for Helen, who lives for being active and enjoying the outdoors, “I found it really difficult to suddenly have to become sedentary and stop doing all the things that made me feel alive!  I became really quite depressed.  The surgeon had said I may never walk without pain again but I decided there was no other option – I had to prove him wrong!”

Helen had decided to turn things around, but was careful, beginning with weight classes and cycling once a week. Slowly she increased the frequency and effort, “Then in 2015, I remember the first day when I didn’t actually think about my knee! That’s when my travel partner Sofie and I made our plans for Kilimanjaro.

“Our 40th birthdays were in October/November 2016 and Kilimanjaro was on our bucket list. I always had a great curiosity about experiencing the various habitats zones on the mountain and I wanted to visit before the glaciers totally disappear from the top.  Also, I just love Africa – a continent whose wildlife, colours and scents seem to reach out and stir the depths of your soul.”

The biggest problem faced by many attempting to climb Kilimanjaro is altitude sickness due to ascending too fast without allowing time for acclimatisation. With that in mind, Helen was worried that her high level of fitness and enthusiasm may be a problem, so she kept her preparations to a minimum.

However, one month before the climb she broke her big toe and had to stop all activity to try to give her toe time to rest and repair, saying “There was no way I was going to miss this once in a lifetime opportunity, come what may!”

And there were more trials to come. Even though her knees and toe held up for the climb, on the first night of the hike Helen contracted amoebic dysentery. Combined with altitude sickness, Helen felt weak and struggled to eat for most of the ascent.

Helen says the hardest part of the climb was the night they went for the summit, “I remember when we left the highest camp, the constellation of Orion was on the horizon when we started out from camp, and it climbed the sky as we neared the crater rim, almost willing us up.

“The constellation of Orion was on the horizon when we started out from camp, and it climbed the sky as we neared the crater rim, almost willing us up. ”
Helen Cox

“I looked back to see the sun rising behind Kilimanjaro’s silhouetted second peak, Mawenzi, with the stunning red and orange glow spreading along the skyline.  I must admit to shedding a secret frozen tear or two with the sense of achievement and beauty of it.”

At that point, she only had a 45 minute walk to the official summit Uhuru Peak to go, but she really struggled. “I was wheezing and struggling for breath, with my lungs filling with fluid.  I was stumbling and felt like passing out.  I tried to take in the amazing view of glaciers rolling off the side of the mountain to the sea of cloud so far below, but mostly I was fighting a stubbornly intense internal battle to get myself to that summit.  There was no way I was going to make it this far and fail at the last stretch!

“I did it.  I felt a mixture of absolutely terrible and elated!  I summoned the energy to have my photo taken at the summit sign, and then I was held under the arm and whisked back around the crater rim and off the side of the mountain for the steep descent back to camp by a porter who will always be a hero in my eyes!”

Helen says she now has a real respect for anyone who has climbed Kilimanjaro, as it involves such incredible self-determination. “People of all ages, shapes and sizes were making the attempt that night and it really was a great life achievement.  I really would recommend it.”

Helen had decided to use this bucket-list triumph to fundraise for WLT, after considering a wide number of causes and charities. “My rationale was that to help treat the cause would hopefully go some way to take care of many of the symptoms, so to speak.  By conserving ecosystems and helping keep balance in nature, the world as a whole has a chance of becoming a healthier place for all its inhabitants, people included.”

WLT is indebted to our fundraisers for involving us in their mission to push their limits. Like Helen, many supporters tackle multiple obstacles on their way to achieving their fundraising goals, and their determination makes them excellent ambassadors we are privileged to work with. We are proud to be a part of their inspirational stories.