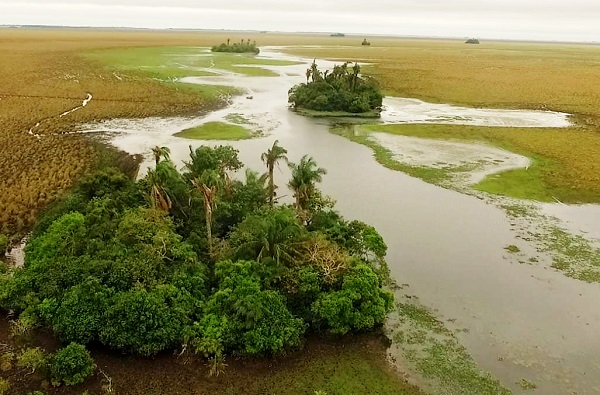 A project to restore degraded forest islands of the Barba Azul Nature Reserve in Bolivia has been successfully completed, with a total of 700 Motacu Palm saplings being planted across seven forest islands.

WLT partner Asociación Armonía identified the forest islands of the Tiniji river system as a roosting and feeding sanctuary for the Critically Endangered Blue-throated Macaw. The forest islands are populated with Motacu Palms, which provide nesting cavities for the macaws and the palm nuts which make up most of their diet.

Most of the Motacu palms on the islands are veterans at 60-90 years old, and are predicted to collapse due to old age in the next 20-30 years. Action is required to ensure the future of this important habitat as a younger generation of these trees has not been able to grow due to decades of pressure from cattle grazing.

Cattle are particularly drawn to the islands for a multitude of reasons: they provide shade during the day; shelter during the night and cold fronts and they allow the cattle to dry out their hooves, which can become damaged if they remain in the savanna too long during the rainy season. So these islands have received a much higher concentration of cattle impact than the surrounding area, which compacts the soil, and Motacu seedlings have struggled to regenerate against constant trampling and herbivory.

The most important step of the recovery program was ensuring that each island in the project was protected from cattle impact, which required a total of 2.5km of ‘wildlife friendly’ fencing being erected around seven islands. These fences have upper and lower wires without barbs to allow animals to crawl under or jump over safely, but two barbed centre wires to prevent cattle crossing.

After fencing was complete, Motacu saplings of different ages could be excavated from the natural nursery at Isla Barba Azul and replanted inside the islands. Tjalle Boorsma, the Barba Azul Nature Reserve Manager, told WLT “While digging the holes, we discovered that the first 5 cm of soil was completely compacted, clearly by cattle pressure, explaining the impossibility for seedling to establish on these islands.”

“Under this compacted layer, we found a moist and nutrient rich black soil. According to locals and our own experience in reforestation, the soil type of the forest islands and the plant specific characteristic (tubers providing drought resistance), we expect a very high success rate of the translocation of Motacu saplings.”

Another important aspect of this project was the ringing of parasitic fig trees, which have taken over many of the adult Motacu trees. These trees grow around the Motacu trees, competing with them for nutrients, water and eventually sunlight, which starves their hosts. By removing part of the stem (ringing) the reforestation team halts this process and protects the stand of older Motacu Palms, allowing the newly planted saplings time to become large enough to produce fruits for the Blue-throated Macaws and being used for roosting.

This reforestation project was made possible by the Action Fund and WLT Friends, which allow WLT the flexibility to support important conservation endeavours proposed by our overseas partners. There are 13 forest islands within Barba Azul, and after the success of this project, Asociación Armonía is planning to extend the program to another four islands in the north of the reserve.