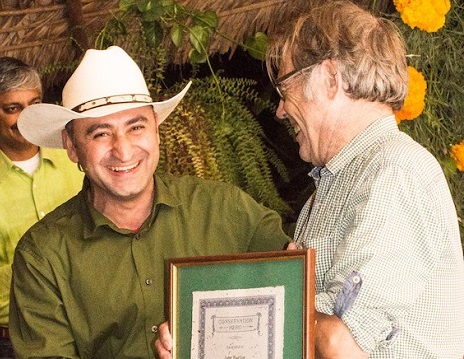 World Land Trust (WLT) partners from around the world gathered in Sierra Gorda, Mexico, for the fifth biennial symposium of the WLT Alliance for Conservation last week.

Symposia of the Alliance are convened to provide the Trust’s programme partners with an opportunity to exchange stories, experiences and new ideas as they all share the same common goal: protecting threatened habitats and their wildlife.  The symposia also give WLT and IUCN Netherlands (one of the Trust’s operational partners who help fund several of the same organisations) the opportunity to discuss new ways to work with them to move forward in their project areas.

Looking ahead: the conservation economy

There was a consensus between partners that fundraising is particularly difficult in the current climate, and that sustainable funding streams need to be established to ensure the longevity of projects. Ideas were exchanged about sustainable income revenues for reserves which could form a ‘Conservation Economy’, such as ecotourism, Payment for Ecosystem Services (PES), Carbon Balanced projects and sustainable agriculture.

Partners were agreed that perhaps the most difficult time for them comes after land has been purchased.  The reserve areas then need protection from illegal logging, poaching and encroachment. To help with the continued protection, WLT founded the Keepers of the Wild program in 2011 after a discussion with the partners about what would be the most effective strategy for WLT help to protect the land that has been saved.

John Burton, Founder and Director of Partnerships at WLT, said “The Keepers of the Wild are the eyes and ears of the reserves.  Rangers are hired from local communities and sometimes even ex-poachers or loggers are employed. They come with the benefit of knowing all the tricks of the trade and become devoted conservationists; they are also greatly respected as a voice in their community.

“It is only by hiring these rangers to do regular patrols within reserves to detect signs of illegal activities that we can ensure the safety of wildlife. They are armed only with cameras, which in this internet age are more powerful than guns, and will often also be involved in wildlife monitoring and environmental education programs important to conservation of the local habitat.”

Celebrating the past 10 years of the Alliance

The collated experiences shared by the members of the Alliance at the Partner Symposia have been invaluable learning experiences for young conservationists and NGOs.

Bibiana Sucre, Executive Director of Asociación Civil Provita (Venezuela), has attended recent WLT symposia under the mentorship of Dr Jon Paul Rodríguez, the Founder and President of Provita. Bibiana said “The symposia have been key to my professional development, and coming to Sierra Gorda has again given me inspiration and increased my desire to work in conservation with NGO projects on the ground.”

After an exchange of experiences about the difficulties involved with working with local communities, and the most effective strategies to ensure that conservation projects are beneficial to both local people and wildlife, it was discussed how these experiences could be passed on to the wider field of conservationists.

On the closing night of the Symposium the partners gathered together to recognise the work of WLT’s founders, John and Viv Burton, and their role in bringing the Alliance together and supporting numerous conservation projects. Ruben Khachatryan presented Viv Burton with an award in appreciation of the support and encouragement towards biodiversity conservation in Armenia and awarded John Burton a ‘Conservation Hero’ medal.

Roberto Pedraza Ruiz, Lands for Conservation Programme Chief of Grupo Ecológico Sierra Gorda and host of the symposium, said “When John and Viv Burton founded WLT, they began to make a difference for wildlife in the most effective manner, making conservation happen in the frontline of many different countries. I can’t think of many others who have achieved so much against the extinction wave.”