9 Fantastic Beasts and Where to Find Them SEARCH NEWS 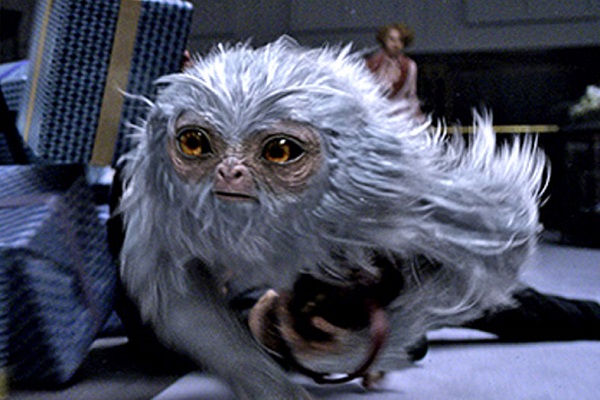 A flash of iridescent blue, a burst of spiny wings and the introduction of a fluffy kleptomaniac- excitement has been building for the unveiling of the magical creatures in the next cinematic adventures within the Harry Potter universe: Fantastic Beasts and Where to Find Them.

World Land Trust has peeked at some of the creatures revealed in the trailer, and tried to find the real animals some of these mystical creations were inspired by. 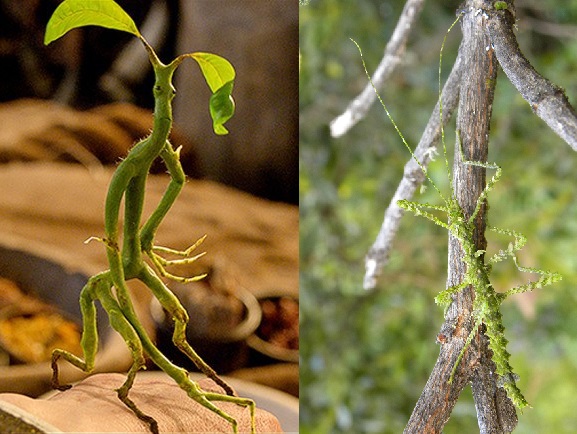 Known from the Harry Potter books as being aggressive but brittle arboreal creatures, the pouting Bowtruckle from the trailer resembles a green stick insect, like this prickly specimen photographed in Chicuate Chinguelas, Peru.

Stick insects may not be magical, but they do have the ability to regrow lost limbs, a highly-prized attribute in the animal world which medical science is striving to replicate.

Fact: Eddie Redmayne confessed that his favourite creature from the film was the Bowtruckle. 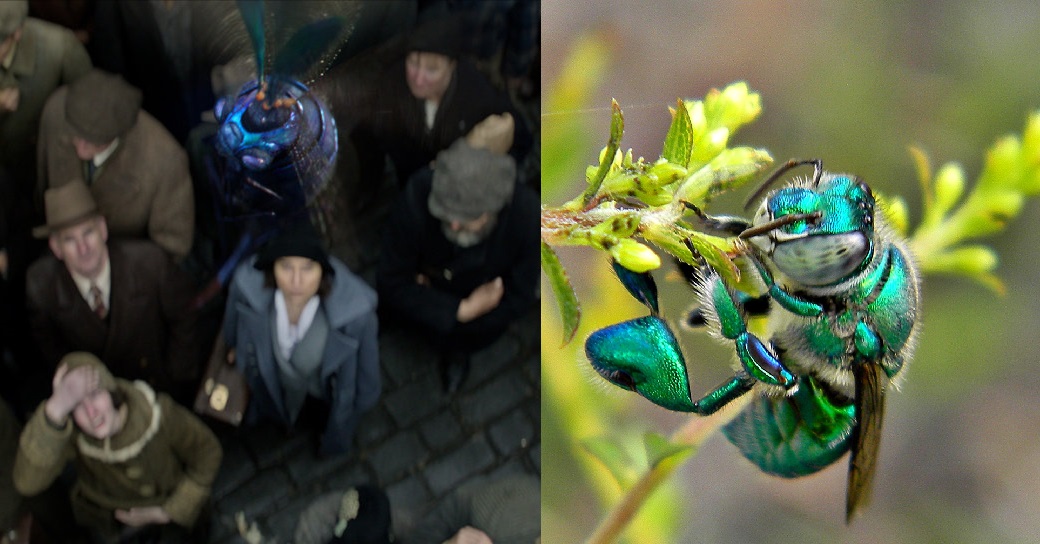 This iridescent insect appears to be a Billywig, with wings attached to the top of its head and whizzing to levitate this creature and its dangerous stinger into the air like a helicopter. Looking into the natural world, it appears to have the compound eyes and luminous colouration of an orchid bee, one species of which can be found in the Sierra Gorda, Mexico.

Fact: Billywig wings adorned Xenophilius Lovegood’s recreation of the Diadem of Rowena Ravenclaw to ‘induce an elevated frame of mind’. 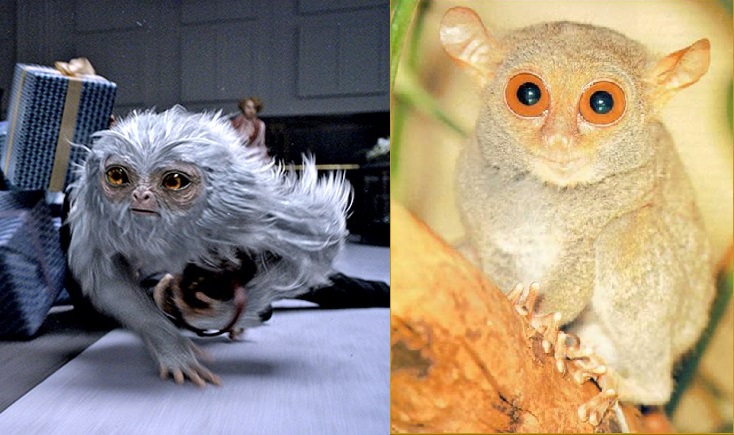 The silvery fur and huge eyes of the Demiguise could have been inspired by a nocturnal primate such as the Horsfield’s Tarsier, which can be found in Malaysian Borneo.  The Demiguise is an elusive creature which can make itself invisible and has precognitive sight, which makes it near impossible to catch. Tarsiers are also elusive (though perhaps not quite as much), near silent in the trees with the ability to rotate their heads 180 degrees while searching for insectivorous prey.

They may not have precognitive sight, but their huge eyes give them superb night vision and are actually heavier than their brains, as the largest eyes compared to body size of any mammal.

Fact: Demiguise hair is used to weave invisibility cloaks, though it is noted that these do not last very long and can be easily damaged.

The ferocious Nundu appears to be a Jaguar crossed with a cactus, so we looked to find where such a ferocious beast may have been conceived- in Mexico, where desert and forest ecosystems can be found in close proximity within the Sierra Gorda Biosphere Reserve.

The Nundu appears to have a history inspired by big cats across the world, as it is reported that Eldon Elsrickle (a wizard from Wonderbook: Book of Spells) kept a cub as a pet, which eventually spelled his downfall. Stories of large carnivores bought as cute cubs are well-known throughout the world, which grow up to be aggressive animals unsuited to captivity.

Observation: As Nundus reportedly cannot be subdued without one hundred wizards working together, the escaped Nundu in the new feature film could pose quite a problem…

As with the Nundu, the Occamy also seems to be a hybrid of several unlikely creatures, with the serpentine body of the Loch Ness Monster but the beak, feathers and wings of an exotic bird. As it has most in common with a bird, we have taken its indigo plumage and yellow eyes to compare it to the Hyacinth Macaw, which can be found in northern Paraguay.

Occamies are choranaptyxic, which means they can grow or shrink to fit into the available space. In the real world, no animal is known to have this gaseous trait, but exotic birds such as the Hyacinth Macaw are under severe threat from the pet trade, after wild chicks are stolen from nests and crammed into small containers to smuggle through international borders.

Fact: The Occamy is named after Occam’s Razor, the theory that the most likely explanation for a strange predicament is likely to be the simplest. 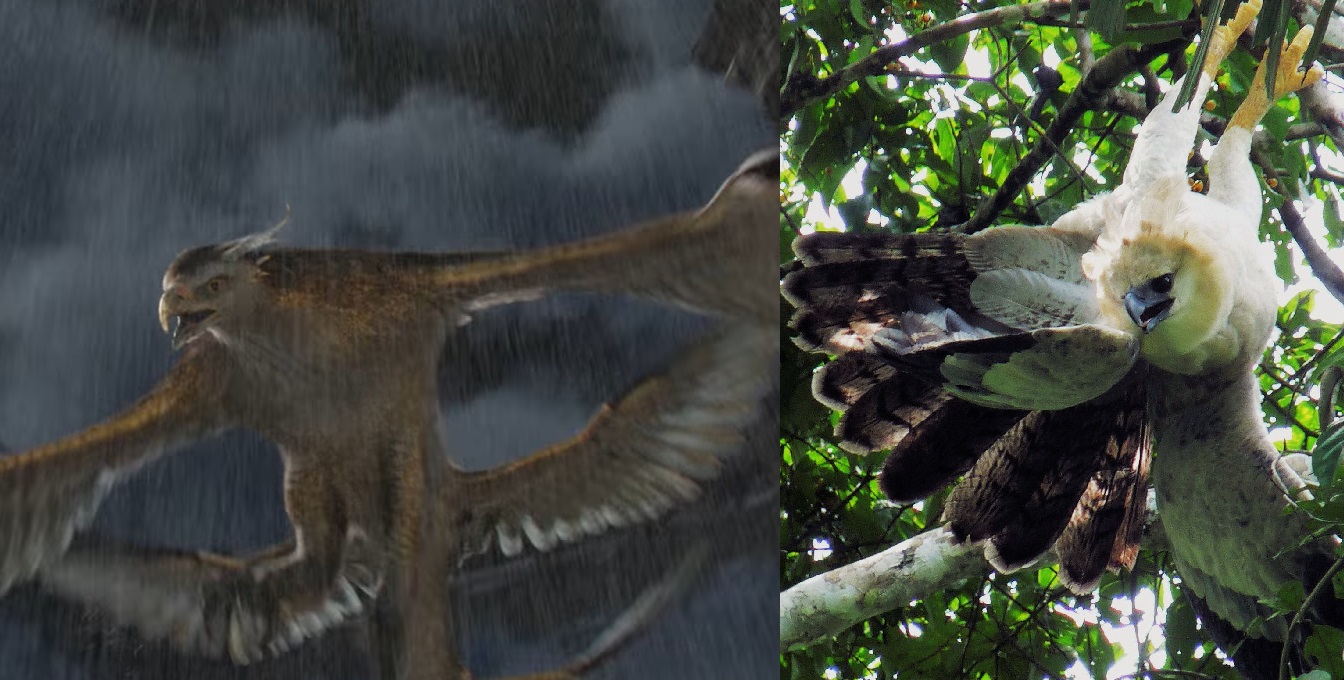 The majestic head and crest of the Thunderbird resembles the magnificent Harpy Eagle, one of the largest raptors in the world, which can be found in Belize, Brazil, Ecuador and Paraguay. But the Thunderbird’s resemblance to birds ends there, as it possess three pairs of feathered wings which create storms as it flies and is the size of one of the larger Pterosaurs (sadly extinct).

However, the harpy eagle should still not be crossed, with talons 3-4 inches long and a wingspan up to 2 metres across.

Observation: As many female raptors are larger than their male counterparts, and the Thunderbird character in the film is male, we can assume that a female Thunderbird is even larger.

One definite conclusion which any zoologist (magi- or otherwise) would make about the Niffler is that it is a monotreme, the extraordinary order of mammals exclusively found in Australia which includes platypus and echidnas.

It appears to have the combination of dark hair and spines of the echidna, with the bill of the Duck-billed Platypus. So far, neither of these real animals has shown the same penchant for stealing shiny objects.

Fact: Nifflers have a characteristic known to another group of mammals endemic to Australia- the marsupials. They have a pouch on their bellies used to hold their stash of treasure.

Both the name and appearance of the erumpent suggest another hybrid, this time between an elephant and a rhinoceros. However, as it appears to swim and burst out of frozen water in the trailer, as well as breathe through a dorsal blowhole, perhaps it also has a distant whale relative.

The erumpent horn is a dangerous ornament in the Lovegood household, which explodes at the slightest touch. It is mistaken for the horn of a (mythical even within the magical world) Crumple-horned Snorkack, and thought to have many properties which have not been proven (as it is disputed whether or not the snorkack exists). Perhaps JK Rowling was inspired by the unfounded ‘magical healing’ properties the rhino horn is thought to have in certain traditional medicine practices, which is causing the poaching crisis of the Erumpent’s closest existing relative.

Fact: There are not many Erumpents in existence, as males have the rather unfortunate habit of blowing themselves up during the mating season.

For the last mysterious beast, we are stumped. Its name suggests even the magizoologist and film’s protagonist Newt Scamander has no idea what it is. Perhaps a cross between a lizard and a butterfly, or another Jurassic throwback, but we cannot find anything in the natural world which resembles it. Which is perhaps quite fortunate, as it has the ability to suck out people’s brains.

And in case you read this far without watching the trailer yet, here it is: