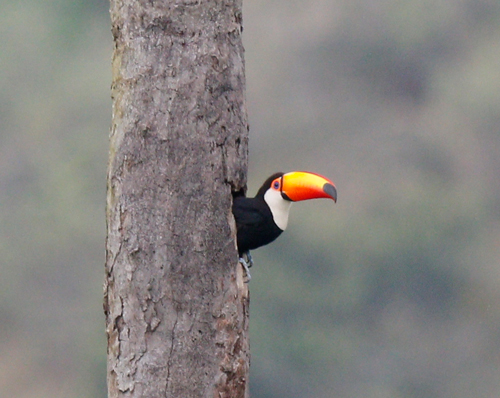 A search for ‘edge habitat’ birds in the area surrounding Reserva Ecologica de Guapiaçu (REGUA), Brazil, has discovered a pair of Toco Toucans.

Toco Toucans are the characteristic toucan species, their striking flame-coloured bill a well-recognised emblem of South American wildlife. Up until now, this handsome species has been a rare sighting in REGUA’s wetlands.

Alan said “Two weeks ago Adilei had seen a Toco Toucan in this area and as we were passing he played a recording of a toucan call, without any great expectation of a sighting. However, almost immediately a Toco Toucan stuck his head out of a nest hole in a dead palm tree beside the road, then further down the same road another bird was seen doing the same thing.”

Certain bird species prefer living on the outskirts of forests- the edge habitat. The reasons for this are theorised to be due to competition with other forest species, favourable changes in the forest microclimate and vegetation specific to the edge of the forest.

As REGUA’s reforestation programme has pushed this edge habitat further from the reserve, there are certain edge habitat birds which are no longer seen within REGUA. Alan and Adilei were looking to see how many of these species could be found nearby.

After the success of the recent Olympic Forest Appeal, WLT is now directing fundraising efforts for Brazil towards the Keepers of the Wild programme.

WLT’s Keepers of the Wild appeal funds the salary of Ranger Antonio Teixeira Nunes, who is heavily involved in the reforestation programme at REGUA, as well as carrying out other fieldwork throughout the reserve.