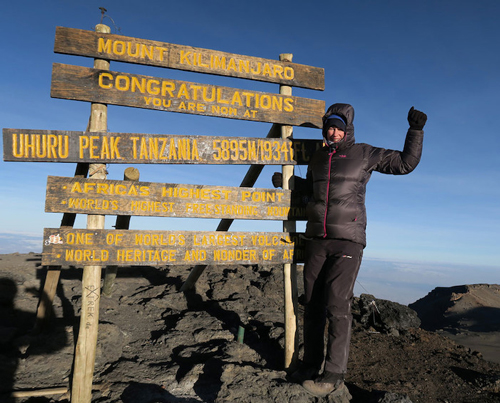 Fundraisers have been busy running, skydiving and cycling to raise funds for World Land Trust (WLT) projects around the world.

Trekking the Lemosho Route, Helen Cox climbed Kilimanjaro in six nights, camping on the mountainside in temperatures which can drop to –29 degrees Celsius. This trek comes at the end of a long road of perseverance for Helen, as she says “In 2010 at 33 years old, I was told by my knee surgeon that I would never walk again without pain.  He said that I should try to manage the pain, stop all my ‘extreme’ activities, and come back to him for a new knee when I could no longer stand it.  In effect, he told me that this was the end of me doing all the things I love most in life – i.e. being active and exploring the world around me.”

Wearing the stylish THTC Elephant Corridor shirts designed by street artist Mau Mau, a group of associates from The Capital Group stood all day to raise funds for the Elephant Corridor Appeal. The Capital Group has a history of support and fundraising with WLT, as fellow colleagues Rob Beale and Phil Giannecchini raised a staggering £7,985 for the Olympic Forest Appeal earlier this year, and last year a group of Capital Group staff gave a day of their time to volunteer at Kites Hill, WLT’s nature reserve in Gloucestershire. Capital Group is also a supporter of WLT’s Carbon Balanced project in Vietnam.

Dodging lions and leopards, Marion Marshall ran 21 kilometres through Kruger National Park in South Africa, completing the Skukuza Half Marathon in aid of WLT’s Keepers of the Wild appeal. Marion has been visiting South Africa regularly for the past ten years, and over her visits has realised the importance of rangers in conservation. She chose to raise funds for rangers because she believes Keepers of the Wild are vital for the long-term protection of wildlife.

First half-marathon for the Olympic Forest

Raising money for both WLT and Nottingham Hospitals Charity, Naomi Walters ran her first half marathon in Newark and even managed to complete it under two hours. Naomi chose to raise funds for WLT’s Olympic Forest Appeal to help protect an area of high biodiversity in Brazil from hunting and deforestation.

Braving Scottish winds on a bicycle

‘Team Flavell’ (Julie, David and Andrew Flavell) braved the blustery weather of Scotland to cycle the Tour de Tay and raise money for WLT. The tour is a 50 mile cycle from Dundee to Perth along the stunning River Tay, and apart from a cross-wind at the start the weather stayed dry and manageable.

Diving through the sky

Jonathan Briggs decided to jump from an aeroplane to raise enough funds for WLT to save at least one acre of rainforest through WLT’s Buy an Acre project. Jonathan’s fundraising exceeded his target enough that just over two and a half acres will be funded by his skydive.

Running one of the world’s most scenic road marathons

Ed Clarke ran the Mount Cook Marathon in the Aoraki Mt Cook National Park, New Zealand. The run follows the main road through the park through lake, mountain and glacial landscapes, which was unfortunately mainly obscured on the day as Ed had to run though torrential rain and 50kmh headwinds. However, Ed managed to set a good pace, finish 12th overall and exceed his fundraising target, raising £800 to protect endangered habitats.