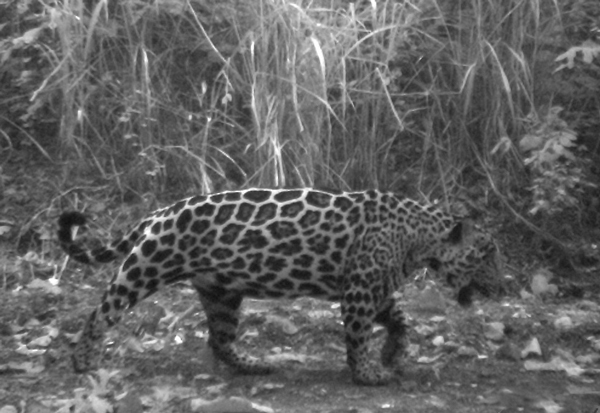 The wildlife of the dry forests of Ecuador have already suffered from a severely reduced habitat, hunting, mining and forest fires, and now surviving landmark species such as Jaguar (Panthera onca) are showing signs of inbreeding as a result of isolated populations in fragmented pieces of habitat.

Inbreeding increases the risk of genetic diseases and reduces the population’s resistance to infectious diseases as well as their ability to adapt to the changing conditions predicted as a result of climate change.

Cerro Blanco is a 15,020 acre (6,078 hectare) reserve of one of the world’s most endangered ecosystems – Ecuadorian dry forest. Lack of connectivity between Jaguar populations in Ecuador is preventing the Jaguars within protected reserves such as Cerro Blanco from reaching unrelated individuals, forcing them to breed within an increasingly interrelated population.

This would be reduced by the formation of biological corridors which would allow males to establish home ranges away from their mothers’ territory, increasing genetic diversity. Fundación Pro-Bosque is working to create a corridor ensuring protection between Cerro Blanco and Chongón Protected Forest, but the forested area connecting the reserves is already in dilapidated condition and would require strong conservation management, so time is running out.

Paul Cun Lainer, Biodiversity Technician at Pro-Bosque, is worried as evidence of inbreeding has already surfaced. Inbreeding in Jaguars increases the risk of malformation, as it does in human populations, and the last photo taken of a wild Jaguar in Cerro Blanco, in 2011, revealed an unusually short tail and small size.

Paul is concerned that this is a deformation indicative of inbreeding, but as Fundación Pro-Bosque lacks the funding to support a programme monitoring Jaguar activity, which would require 40-50 camera traps and a full-time field biologist, there is currently no means of carrying out a survey of the population and its genetic diversity.

It is not just Jaguar populations at risk of inbreeding; Cerro Blanco is home to 54 mammal species which need to be able to reach other populations in order to sustain a healthy genetic diversity, ensuring the future of the species.

World Land Trust is currently funding Ranger Armando through the Keepers of the Wild Programme, working to protect and monitor the Jaguars found within Cerro Blanco.