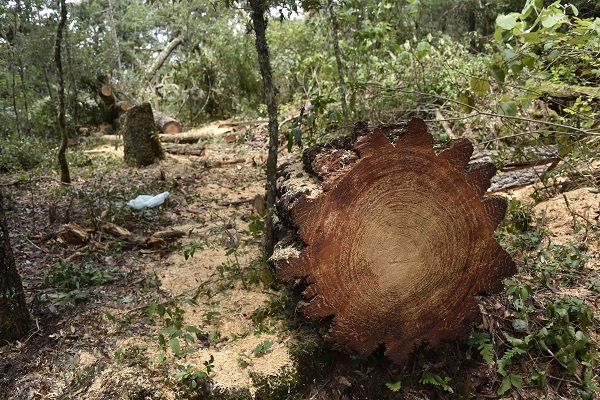 The importance of World Land Trust’s (WLT) Buy an Acre Mexico project has come sharply into focus after a site of extensive illegal logging was discovered within the Sierra Gorda Biosphere Reserve, in a communally owned forest outside the protection of private reserves owned by WLT partner Grupo Ecológico Sierra Gorda (GESG).

After several reports to the environmental authority received no response, staff from GESG visited the forest of Cerro Grande, a mountain near the community of San Juan de los Durán, to document the logging.

Wildlife that pays the price

Roberto Pedraza Ruiz, Technical Officer of GESG, was horrified by the sight of destruction and waste that met him, “It was heartbreaking to find such destruction in what used to be real wilderness with towering firs, pines and cedars, where Jaguars, Margays and Bearded Partridges used to roam.”

“Now there is just a pile of scarred trunks, with so much timber left there for nothing. They have cut down what used to be a magnificent fir tree 40 metres tall for only 3 metres of wood they will sell for just a few pesos.”

As he was leaving the logging site, Roberto found a Bromeliad Arboreal Alligator Lizard, a Vulnerable species rarely seen as they live in the treetops. It was only the second time Roberto had seen one in his 20 years patrolling the forests, and it is possible the logging was the reason it came down from the canopy.

When SGBR was created in 1997 by the Federal Government, 11 regions within it were declared ‘core areas’ which together contained all of the unique ecosystems of Sierra Gorda. These areas were designated for conservation alone, but lack of enforcement by the National Commission of Natural Protected Areas (CONANP), in charge of protecting the SGBR, has enabled illegal logging, such as this incident which occurred within a designated core area, to occur. With the support of WLT, GESG are addressing this by creating privately owned reserves in areas most threatened by logging.

The core areas are currently under a greater logging threat than before due to climate change. Research has shown that higher temperatures are making forests more susceptible to bark beetle outbreaks, which have destroyed pine trees in more accessible areas. Now loggers are venturing further from the communities into the core areas looking for cedar and fir timber.

The properties currently being purchased to extend the Cerro Prieto-Cerro la Luz Reserve are within the same core area that was affected by this incident. Once purchased the forest habitat and its wildlife are protected by GESG and incidents such as this one are prevented.