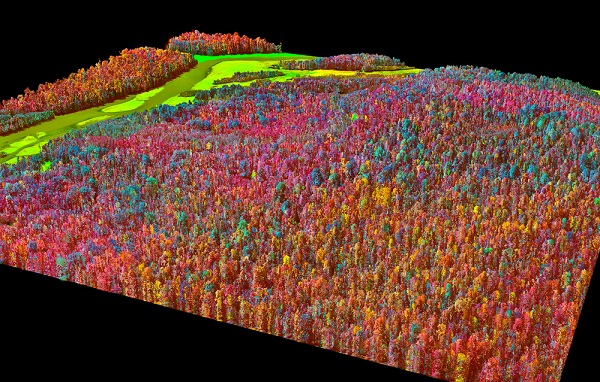 An airborne observatory which is revolutionising forest ecology has recently flown over some of the reserves protected by World Land Trust and local partner Fundación EcoMinga, and has the potential for helping conservationists discover new tree species.

The two-engine 20 passenger plane takes seconds to assess forests to a level of detail that would take researchers  lifetimes of fieldwork to collect. With millions of dollars of cutting-edge laser and spectrometer technology built into it, the Carnegie Aerial Observatory (CAO) can sample hundreds of thousands of hectares of forest per day. This data is cross-referenced with a digital catalogue of the chemical and optical properties of around 4,700 plant species in different conditions, which allows scientists to create a map of the forest’s condition.

The colours displayed in these maps represent several layers of information about each tree and its state of health, allowing scientists to judge the effects of events such as drought or disease as well as spot otherwise unnoticeable symptoms within unstudied regions of forest. In one case, aerial data of forested area in Hawaii revealed regions where the canopy showed unusually low levels of nitrogen, and led ecologists to discover that an invasive ginger plant was competing with native trees for nitrogen.

Years of surveys in seconds

Tropical biologist and Principal Investigator at CAO Greg Asner brought the plane to Ecuador for a ten-day study of Amazonia. One of the CAO’s research flights crossed two kilometres through the area managed by EcoMinga, which will provide a wide, detailed insight into the structure and diversity of the forest.

Lou Jost, Co-founder of Fundación EcoMinga, said “I am really excited about the potential for this data. It would tell us the structure and diversity of the forest, and my biggest hope is that some of our most special trees, such as Magnolias, will have distinctive spectral fingerprints, so that we can find and map them. If the Magnolia genus has a distinctive fingerprint, we might be able to identify sites with Magnolias outside the elevation ranges of the known species, so we could use this data to discover new species of Magnolia.”