Cameras and courage against corruption in Armenia SEARCH NEWS 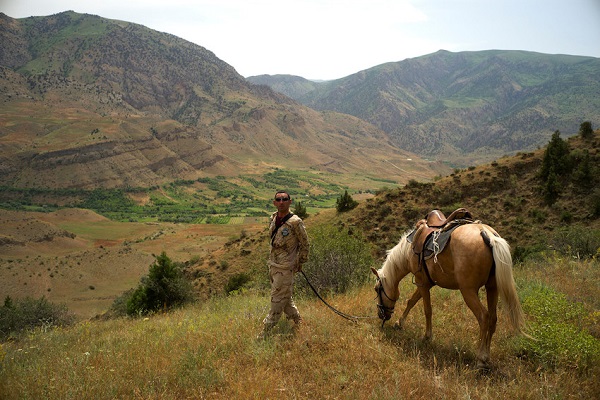 Recently World Land Trust’s (WLT) founder John Burton visited the Caucasus Wildlife Refuge (CWR), protected by WLT’s partner in Armenia, the Foundation for the Preservation of Wildlife and Cultural Assets (FPWC). He was joined by WLT Council member Simon Barnes and photographer David Bebber. In advance of his features in the Sunday Times this weekend (10 July 2016) and next (17 July 2016), Simon speaks with Nina Seale, Writer/Editor at WLT, about the landscape of Armenia and the role of the rangers in protecting it.

“The rangers are employed from the local communities, which makes it easier for them to build a cooperative relationship with them, which is essential to their work. They already know everybody and who’s who. Because the rangers often come from poor communities and they earn a regular salary they become people of some clout so what they say tends to have an influence.”

These relationships are important when it comes to persuading local people not to hunt in the reserve, but Simon says that the main poaching problems come from the rich coming to the reserve to shoot game. This is a continuing problem in the area, and presence of rangers is essential “If you have rangers on the ground you instantly reduce poaching pressures just by being there, you don’t actually have to go and shoot them up and chase them and such.”

“Manuk, the head ranger, told me he’s there on patrols not with a gun, but with a camera,” Simon states, holding an imaginary camera to his eye with a click. “They’re not afraid of guns, these poachers, they’re afraid of cameras, of the internet. You shoot a picture of them, you put it on Facebook, and that’s what hurts them; it makes them look foolish. So that’s what a ranger is doing, by existing and moving around the place- sometimes with considerable courage. They’re on the ground and are keeping the wild safe.”

Corruption is notorious in Armenia, and conservation is threatened by it. “Ruben Khachatryan, FPWC’s founder, runs a transparent and non-corrupt organisation, and this is helped by having rangers who are paid decent salaries.” 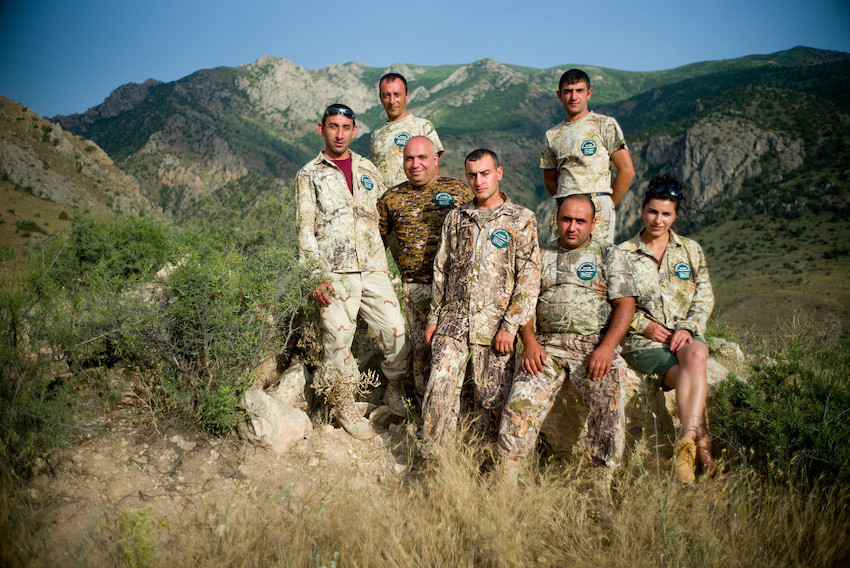 “They are decently turned out as well, in gear they can wear with pride, with a WLT Keepers of the Wild badge which says ‘Look, if you do something bad to me, it’s not just someone in the local village who is going to hear about it, it would be an international incident.’ These guys have meaning and prestige in the community. You can tell it from the way they comport themselves, not offensively, but they move like people who are pleased with what they are doing- they enjoy their work and know it is for a good cause.”

Simon hopes that one day the communities in the Caucasus will generate income from ecotourism, and he was keen to describe the staggering scenery:

“It’s vertiginous landscape; it hurts your neck to see the sky. It starts at the bottom with rock-strewn streams and rivers running through the valley bottom and wild rose gardens. Then you climb up onto the alpine meadows, which are grazed and cut for hay, where the flowers are at their absolute peak.”

“Just the colours were extraordinary in themselves, like a child with a new paintbox determined to try a bit from every tube in the same painting in a reckless use of colour. There was just so much of everything. It was as rich a landscape as I’ve ever seen, and I’ve been in rainforests.”

“We were really almost like people enchanted driving around that landscape. There’s a line from one of the Narnia books ‘I’d have been a better man all my life if I’d have known there were places like this’. There was a feeling like that there, the feeling that people should know that there are places as wonderful as this because it would change your attitude to so many different things.”

To support the important work of the rangers protecting the Caucasus Wildlife Refuge and other WLT supported projects, you can donate to the Keepers of the Wild project.