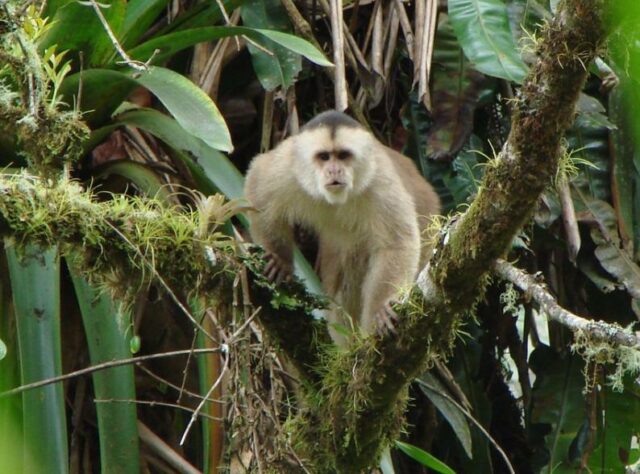 Two Ecuadorian White-fronted Capuchins have been recorded in Buenaventura Reserve, bringing hope for continued reintroduction efforts for this species in southern Ecuador.

These monkeys are the survivors of a reintroduction program for the Critically Endangered species, carried out by World Land Trust (WLT) conservation partner Fundación Jocotoco (Jocotoco) between 2009 and 2010 in Buenaventura.

There was no evidence of offspring from these individuals, but their survival is proof that the reserve’s habitat is suitable for the species.

In 2009 Jocotoco constructed a large pen in the upper valley to reintroduce the animals to the area. They obtained captive White-fronted Capuchins (Cebus albifrons aequatorialis) that had been confiscated in various parts of south-west Ecuador.

They were treated by vets and checked for health problems before being transferred to Buenaventura.

10 White-fronted Capuchins were released in 2010, with a further two individuals introduced in March 2011. These were young, healthy individuals, comprised of seven males and five females.

They did not form a group, but remained solitary or in pairs. Although, they were fed consistently at the release site, only two individuals came regularly to feed.

The capuchins quickly moved to the lower Buenaventura valley, where a pair are occasionally seen by researchers and park guards.

There are reports of capuchins from a neighbouring forest just south west of Buenaventura. However, this area is fragmented, with a non-forested gap spanning one kilometre between Buenaventura Reserve and the forest.

Given the continued presence of a few White-fronted Capuchins in Buenaventura Reserve, Jocotoco is assessing the potential for another release effort.

Buenaventura was recently extended thanks to joint funding from WLT and American Bird Conservancy (ABC).

World Land Trust’s contribution to the extension of Buenaventura was funded by the Action Fund. You can help WLT to respond quickly where urgent conservation is needed by donating to the Action Fund.