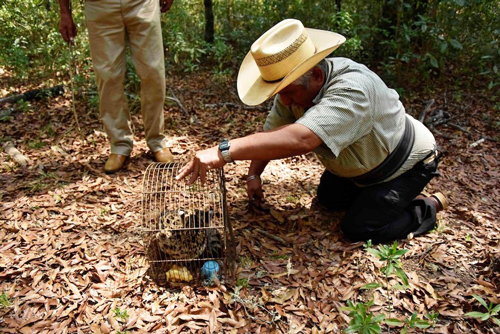 GESG is a conservation partner of World Land Trust (WLT), working together to secure threatened habitat in Mexico.

For several days, chickens were mysteriously abducted from Mr Juan Fonseca’s chicken farm, on the eastern ridge of the Sierra Gorda, between two of GESG’s reserves.

After hearing a commotion from the birds Mr Fonseca hurried out to catch the thief, which turned out to be a female Margay (Leopardus wiedii). He managed to capture her under a large blanket before contacting GESG.

Roberto Pedraza Ruiz, GESG’s Technical Officer hurried to the farm after receiving a phone call from Mr Fonseca’s daughter, a school teacher to whom Roberto had recently presented a biodiversity talk.

A right to life

Roberto managed to convince them to release the Margay in the nearby Cerro Prieto reserve. The release went well and the Margay left the cage ‘like a cider cork’, eager to return to the wild.

When asked why he didn’t kill the Margay, as is often the case with farmers dealing with predation, Mr Fonseca told Roberto “animals also have a right to eat and live, why I would kill her?”

This heart-warming encounter highlights the way in which WLT’s network of local conservation partners work with communities to benefit threatened wildlife such as Margays.

You can support the conservation work of GESG by funding land purchase in Mexico through WLT’s Buy an Acre programme.