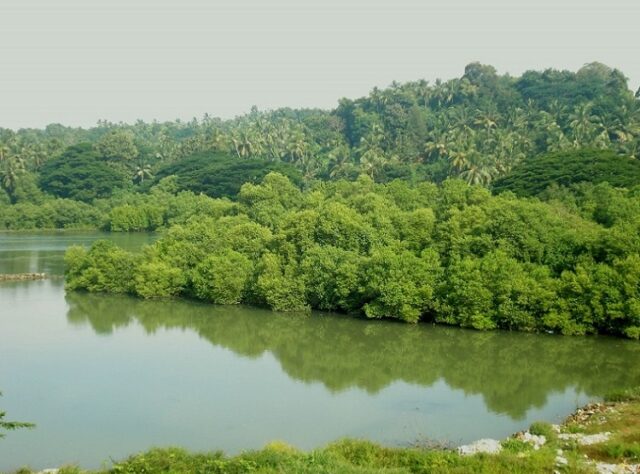 The Kannur Kandal project, ‘kandal’ meaning mangroves in Malayam, will build on the work begun by the WTI and WLT partnership in 2006 as a result of WLT’s Reef & Mangrove appeal.

Protecting mangrove habitats across the Kannur district of Kerala, WLT initially assisted WTI in purchasing just short of 19 acres (7.5 hectares) of this species-rich habitat.  This land will now be used as a base for mangrove research and education, contributing to the greater mission of promoting mangrove restoration through community and government participation in Kerala and beyond.

“The abuse and decline of our mangrove forests should be of particular concern to all of us”, said WTI’s Executive Director & CEO Vivek Menon, “primarily for the loss of their marvellous biodiversity, but also for their value as a natural buffer against climate change and its attendant adverse effects.”

“I am extremely pleased, therefore, that we at the Wildlife Trust of India have partnered with Apollo Tyres to launch the Kannur Kandal Project. This is a crucial first step towards the securing and restoration of our mangrove forests; I trust that as the project unfolds it will serve as a model for Kerala and subsequently, the rest of coastal India.”

“The abuse and decline of our mangrove forests should be of particular concern to all of us… for their value as a natural buffer against climate change and its attendant adverse effects.”
Vivek Menon, WTI’s Executive Director & CEO

Mangroves, sometimes little more than shrubs, sometimes tall trees, are adapted to live in coastal or estuarine areas with water of high salt content. Mangroves have stilt-like roots which form an intricate structure for coping with saline tides and changing water levels, and these act as buffers against cyclones and tsunamis.

Their complex root systems are the foundation of a unique habitat as sediment collects within them, providing a food source for a wide variety of aquatic species that use this sheltered habitat as both refuges and nurseries.

Mangroves in the Kannur district are considered vitally important for biodiversity as they are known to harbour more than 170 bird species (including wintering species such as Asian Openbill-Stork Anastomus oscitans, European White Stork Ciconia ciconia, and the Eurasian Spoonbill Platalea leucorodia). There are some 110 species of fishes in the mangrove lagoons, 14 species of molluscs including two economically important species of edible clam and 15 species of crabs.

There are also 13 recorded species of mammals, including the endangered Smooth-coated Otter (Lutrogale perspicillata), whose population is thriving despite close contact with humans, and the Jungle Cat (Felis chaus).

However, the mangroves of Kerala are struggling to survive. Once they covered nearly 173,000 acres (70,000 hectares) but are now reduced to less than 4,500 acres (1,750 hectares). The WTI-Apollo Tyres project will be based in Kunhimangalam village, which is one of the largest mangrove villages of Kerala, where a mangrove nursery will be established and community-based initiatives will focus on increasing public awareness and reducing threats to mangroves.

Satish Sharma, Apollo Tyres Ltd’s President for Asia Pacific, Middle East & Africa said “Biodiversity conservation is an important thrust area within our Environmental Sustainability initiative – HabitAt Apollo. We are happy to partner with Wildlife Trust of India on mangrove conservation, a project that has huge ecological significance. This association reflects our commitment towards bringing conservation issues to the forefront, raising awareness and creating positive impact.”

World Land Trust launched the Reef & Mangrove Appeal in response to the 2004 Boxing Day tsunami to help with mangrove and coral recovery. Most recently WLT funding was used to protect the mangrove habitat of manatees on the Guatemalan coast by funding the purchase of Tapon Creek Reserve by partner Fundación para el Ecodesarrollo y la Conservación (FUNDAECO).

WLT is not currently working on a Reef or Mangrove project, but if you would like to support this initiative you can donate to the Action Fund and specify “Mangrove Appeal India” in the comments box to earmark your donation.

Following the tsunami in 2004 the WLT established a Reef & Mangrove Appeal, and we have now been accepting postal …