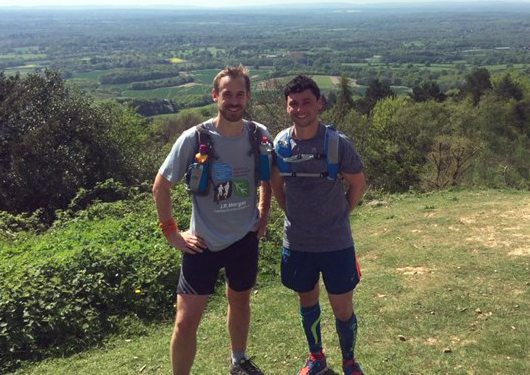 The London 2 Brighton Challenge is now just a month away and two more daring fundraisers are taking on this marathon walk for World Land Trust (WLT).

On Saturday 28 May Rob Beale and Phil Giannecchini will be setting off to take on 100 kilometres (62 miles) of paths, trails, all the way from London to Brighton, aiming to complete this marathon trek in less than 15 hours.

Both Rob and Phil work for Capital Group, a supporter of WLT’s Carbon Balanced project in Vietnam. In July, representatives of WLT took part in a charity day for staff of the Capital Group’s London headquarters and Capital Group employees visited WLT’s Kites Hill reserve.

Rob spoke about his motivation for raising funds for WLT:

“I have got to know World Land Trust over the last couple of years through one of their projects that Capital Group is supporting, and I am very supportive of the work they do protecting natural environments.”

So far the pair have raised a staggering £3,000, thanks to generous sponsorship from their friends and colleagues.

“Being lucky enough to have visited some amazing wild places around the world, I strongly believe that these should be preserved for the benefit of future generations. World Land Trust do this in the most effective way by partnering with local communities.” Said Rob.

You can sponsor Rob and Phil on their JustGiving page.

Patrick Donegan set the ball rolling by signing up to the challenge in September 2015 and WLT’s Head of Development Dan Bradbury joined the team soon after. You can donate to Team World Land Trust via their JustGiving page.

Inspired? Find out more about how you can become an individual fundraiser »