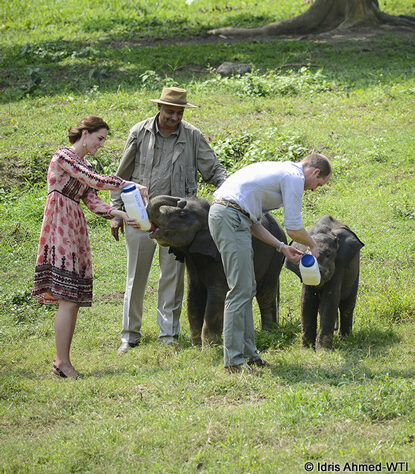 On a recent trip to India, The Duke and Duchess of Cambridge took time to visit the Centre for Wildlife Rehabilitation and Conservation (CWRC), which is run by Wildlife Trust of India (WTI), International Fund for Animal Welfare (IFAW) and the Assam Forest Department.

The CWRC is recognised as the only rescue and rehabilitation facility for orphaned and injured wildlife in India, where several different species are hand-raised or treated before being returned to the wild.

Prince William and Kate Middleton were accompanied around the grounds by WTI Executive Director Vivek Menon and IFAW President & CEO Azzedine Downes. While at the CWRC the Duke and Duchess hand fed some of the centre’s most recent additions, including two elephant calves and a young rhino.

World Land Trust (WLT) has been a conservation partner of WTI since 2003, working to secure elephant corridors throughout India.

Working in cooperation with the Assam Forest department, the CWRC has dealt with more than 4,000 animal cases, with a rehabilitation rate of almost 60 per cent.

Vivek spoke to the Duke and Duchess about the importance of elephant corridors and the aims of the Asian Elephant Alliance.

In July 2015, WLT became a founder member of the Alliance – five international conservation organisations with a common goal to save secure habitat for Asian Elephants.

The Asian Elephant Alliance, comprised of WLT, WTI, IFAW, Elephant Family and IUCN Netherlands, aims to raise a total of £20million to ensure the future survival of wild Asian Elephants in India through the securement of 100 biological corridors across India by 2025.

WTI works with partners like WLT and Elephant Family to ensure that villagers affected by human-wildlife conflict are voluntarily relocated so they can live safely away from the threat of elephants and tigers.

Their Royal Highnesses were introduced to some villagers from Ram Terang, who recently relocated to a newly constructed village to avoid conflict with wildlife. The relocation was part of a project between WTI and Elephant Family.

Donate as a gift »