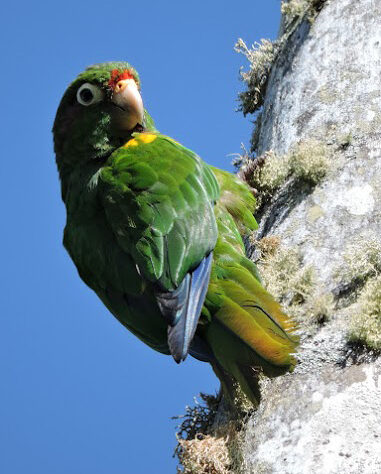 Colombia – home to more species of bird than any other country on the planet, around 1,900 and increasing.

I was lucky to stay at two Fundación ProAves Reserves in January: El Dorado Lodge in the Sierra Nevada de Santa Marta, and the Cerulean Warbler Reserve, located in the Colombian Eastern Cordillera near the town of San Vincente de Chuchuri.

El Dorado Lodge is ideally placed within the ProAves reserve which totals some 2,530 acres (1,024 hectares). The Santa Marta range is home to around twenty endemic birds, the majority of which can be seen during a two to three day stay.

High on my ‘must see’ list were Santa Marta Parakeet (Pyrrhura viridicata) and Santa Marta Antpitta (Grallaria bangsi). Fortunately a post-roost tree was well known to the lodge staff and on our first morning a group of 25 parakeets were well watched just after dawn.

The Santa Marta Antpitta proved more difficult. After hearing at least three calling birds, I was rewarded on my last morning with a single bird down to twenty feet on the track up from the lodge, hopping out of the undergrowth to feed on small grubs, I was entranced, and even now some two months on, it still brings a wide grin to my face.

The lodge itself is idyllic, my favourite memory sitting on the balcony listening to the recently discovered and as yet undescribed Santa Marta Screech-owl (Megascops gilesi) calling while enjoying a cold Club Colombia.

The Cerulean Warbler Reserve, as it name suggests was purchased in 2005, to protect this declining American Wood-warbler. The reserve has an area of 513 acres (207 hectares). In addition to providing wintering habitat for a variety of migratory passerines, it is also home to several endangered species.

During my two day stay I walked the Lengerke path, made of stone in 1840 by the German of the same name, seeing the endemic Black Inca (Coeligena prunellei), but sadly missing the endangered Gorgeted Wood-quail (Odontophorus strophium).

A feeding station within the rainforest affords point-blank views of the Inca, together with host of other hummingbirds. The gardens around the lodge itself are also a magnet for birds, Turquoise Dacnis (Dacnis hartlaubi) being my personal highlight.

Both lodges provide comfortable accommodation together with excellent food. At El Dorado the resident guide Roger Rodriguez knows the birds and area like the back of his hand, and will show the endemics and specialities. Who knows, perhaps in the future El Dorado may offer a three day trek to higher elevations to see Santa Marta Wren (Troglodytes monticola) and the recently rediscovered Blue-bearded Helmetcrest (Oxypogon cyanolaemus). Here’s hoping!

World Land Trust supports the purchase and protection of threatened land in Colombia through the Buy an Acre programme.

Buy an Acre in Colombia