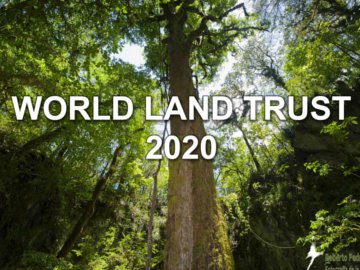 A five year development strategy has been approved by Trustees of World Land Trust (WLT).

Final approval for the plan, WLT 2020, was given at the 100th meeting of the Trustees on 9 December 2015. A public version of the strategy will be available on WLT website in the near future.

The 100th meeting was a milestone for WLT. Jerry Bertrand, WLT’s Co-founder and Honorary President, was unable to attend but sent a message of support to Simon Lyster, WLT’s Chair of Trustees, and the rest of the board.

“Congratulations to you and your fellow trustees on your 100th meeting on behalf of conservation. Your generous service has added millions of acres of protected wildlife habitat across the globe in a few short decades. From my own service as a trustee I know that the work is demanding, taking personal time, money and effort but the outstanding results speak for themselves.”

In response, Simon paid tribute to the vision of the founders of WLT: “Jerry, John and Viv deserve enormous plaudits for their vision all those years ago. It is wonderful to see the way the organisation has developed, and to know that it will get even better in future.”

John Burton to step down as Chief Executive

At the same meeting the Trustees agreed a timetable to recruit a new Chief Executive, following John Burton’s decision to step down from his current role later in 2016. John has been in post since the Trust was founded in 1989.

Of his decision, John said: “This was the 100th meeting of the Trustees and Council and provided a good opportunity to review and celebrate achievements made possible by our partners, staff and funders over the past 25 years. Our 25th Anniversary year was also a good time for me to reflect on my own position at WLT. Having been at the helm for so many years I have decided that it is time for me to step aside and make way for a new CEO. The development strategy gives a strong focus, and the path is set for significantly increasing our conservation impact by 2020. A new CEO will bring fresh eyes, vision and leadership to benefit our strong team and core objectives.”

WLT has released a film showing the highlights of the Trust’s conservation successes in 2015.