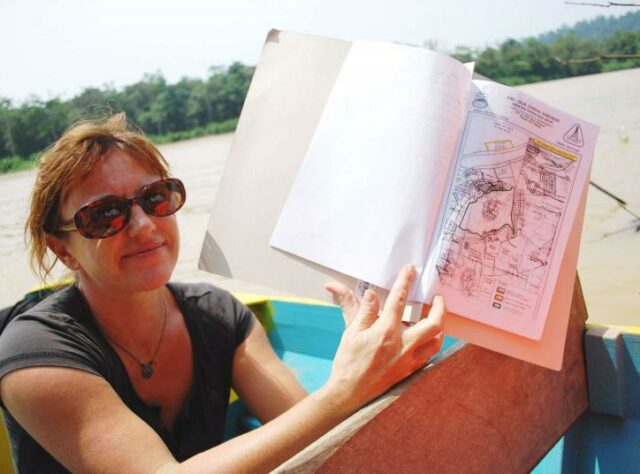 Exciting news from Malaysian Borneo, the purchase of the final family owned plot in the first phase of Keruak Corridor is under way.

That means there is just one riverine parcel left unprotected. Once secure, this plot will connect an unbroken corridor of forest properties along the north bank of the Kinabatangan River between Keruak Virgin Jungle Reserve and Lower Kinabatangan Wildlife Sanctuary. This was WLT’s dream when the Trust launched the Borneo Rainforest Appeal for Big Match Fortnight in 2013.

Snaking through an area of rainforest that is rapidly being cut down to make way for Oil Palm cultivation, Keruak Corridor is a lifeline for Bornean Orang-utans.

Adult orang-utans range over large distances, up to three kilometres a day, in search of a mate.

Protecting Keruak Corridor will allow these large, charismatic mammals to range freely, removing the threat of persecution by plantation workers, and ensuring individual animals do not become isolated from one another.

“Habitat fragmentation has become the main threat for the Kinabatangan orang-utan population. The Lower Kinabatangan Wildlife Sanctuary is small and fragmented, and it is surrounded by human activities. It is now crucial to reconnect the protected forests fragments and to secure a safe passageway for wildlife along the Kinabatangan River,” said Dr Isabelle Lackman, Co-director of Hutan, WLT’s programme partner.

“It is now crucial to reconnect the protected forests fragments and to secure a safe passageway for wildlife along the Kinabatangan River.”
Dr Isabelle Lackman, Co-Director, Hutan

WLT has been committed to forest conservation in the Kinabatangan floodplain since 2008. Actions to secure the Keruak Corridor began in 2011 when WLT funded the purchase of one of the riverine properties.

This property was to become one of the cornerstones of the corridor, adding to four other plots purchased with funds from the Abraham Foundation in 2005 and one plot purchased by the Borneo Conservation Trust in 2013.

Then, following a field trip to Sabah in 2012, WLT launched a high profile and hugely successful Borneo Rainforest Appeal in 2013. By May 2014 the special appeal had raised £1million.

With its vision, dedication and expertise, Hutan has driven the success of this project. However, none of the purchases would have been possible without the local knowledge, connections and negotiating skills of Hutan’s local partner, Nature Heritage Conservancy.

“The success of this project is testament to the strong partnerships and working relationships that have been forged. Delivering effective conservation projects requires actors at the local, national and international level. This project clearly demonstrates the strength of WLT’s operating model – to support in-country conservation partners to deliver against their conservation priorities,” said David Wright, WLT’s Head of Programmes.

“The success of this project is testament to the strong partnerships and working relationships that have been forged. Delivering effective conservation projects requires actors at the local, national and international level.”
David Wright, Head of Programmes, WLT

In mid January 2016, WLT received confirmation that the owner of the final village-owned property on the corridor’s riverine edge had approached Hutan with an offer to sell.

This village parcel measures about six acres. The owner had previously been unwilling to sell because the land has been in his family for generations however, the family home has long disappeared and the forest has overrun the property.

There are still many fruit trees on the plot, including a giant durian tree, known as ‘the king of fruits’. This particular specimen is known to be an important food supply, used by orang-utans every fruiting season.

Thanks to WLT and its supporters, Hutan has funds in hand to purchase the plot outright.  Isabelle is hopeful that the sale will be completed by end of January.

Speaking for everyone at WLT, David said: “This is great news, which sees Hutan complete its negotiations with private individuals. But the work doesn’t stop here if we are to secure all the riverine properties in the corridor, and we continue to do all we can to support Hutan in strengthening the corridor.”

Hutan is now negotiating with the commercial owner of the final property to complete the riverine section of the corridor.

The second phase of the Keruak project is focused on widening the corridor by securing adjacent properties to the north, all of which are adjacent to the existing wildlife sanctuary.

This involves negotiating with various land owners, including the commercial palm oil sector, in an effort to secure land donations. “Talks are ongoing and are only made possible by the generous donations of WLT’s supporters,” said David.

You can support conservation in Malaysian Borneo by donating to Keepers of the Wild.