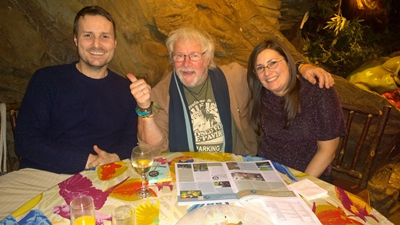 Steven Ware is undertaking his fourth challenge to raise money for World Land Trust (WLT). This time the task is a sponsored walk of around 15 miles, to work and back, on 15 January 2016.

Steven is a long term supporter of WLT, raising money on several occasions. Steven dyed his hair green for a month in January 2015, and in 2011 he raised nearly £500 by painting a tree on his car for every donation he received.

In June 2014 he did 1,000 push ups in two hours, a feat which raised more than £1,000 and earned him a special Anniversary Fundraiser’s certificate signed by WLT Patron Sir David Attenborough.

Steven explained why this challenge was especially important to him: “This walk will be a challenge for me as I have a physical condition that means I will have to take it slow. That being said, I refuse to let it stop me and I’m determined to complete the walk and raise money for WLT.”

Are you looking for a New Year challenge? Find out how you can raise funds for WLT »