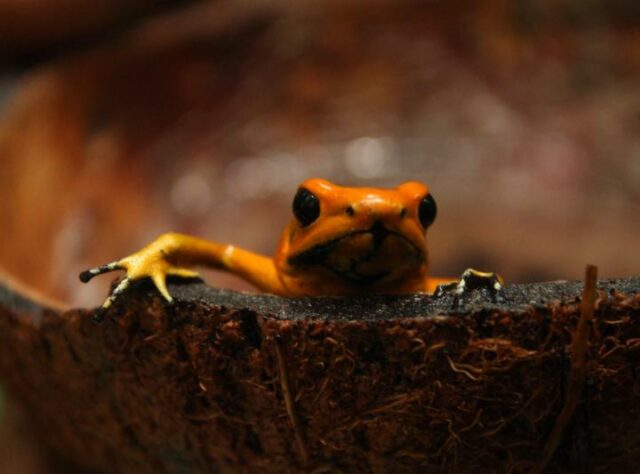 Funds raised by wildlife presenter Steve Backshall have been used by World Land Trust (WLT) to guarantee the salary of a ranger to protect the Golden Poison Frog in Colombia.

Found only in a small area of Chocó rainforest in Colombia, the Golden Poison Frog (Phyllobates terribilis) is the most poisonous creature on the planet.

Having featured the threatened amphibian in his Deadly 60 television series, Steve was delighted to be able to fund a ranger to protect the species for a year through WLT’s Keepers of the Wild programme.

Steve told WLT: “I am really very pleased that the funds that I raised are protecting the reserve where Phyllobates terribilis is found.”

Ranger Venancio Florez Lopez is employed by Fundación ProAves to work in the Rana Terribilis Amphibian Reserve, the only place on earth where the Golden Poison Frog survives. The reserve was created by ProAves in 2012 with the assistance of WLT and WLT corporate supporter Puro Fairtrade Coffee.

Venancio has a key role as protector of the Golden Poison Frog, which is classified as Endangered by IUCN. In monitoring the population and behaviour of frogs on the reserve, ProAves has developed an ingenious way of providing suitable breeding habitat – in coconut shells. The shells are filled by rainwater and Venancio records breeding and tadpole development.

You can help support the work of other wildlife rangers in reserves funded by WLT by donating to the Keepers of the Wild programme.