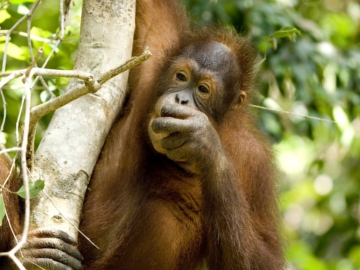 Three more plots of land have been saved in Keruak Corridor in Malaysian Borneo, thanks to funding from World Land Trust (WLT). And in breaking news, Hutan, WLT’s conservation partner in Malaysia, has confirmed that the owner of another property has agreed to sell and that one more part of the corridor will soon be safe.

The Keruak Corridor properties lie along the north bank of the Kinabatangan river. The corridor provides a lifeline for Bornean Orang-utans (Pongo pygmaeus), classified as Endangered on the IUCN Red List.

Protecting the corridor has been a WLT priority since 2013, and progress to date has been achieved thanks to Hutan’s work on the ground and the generosity of WLT’s supporters, hundreds of whom donated to a special appeal during Big Match Fortnight 2013.

Keruak Corridor is made up of 26 contiguous properties in Sabah. Together these plots of land form a strip of forest linking Keruak Virgin Jungle Reserve and Lot 2 of Lower Kinabatangan Wildlife Sanctuary. Safeguarding all sections of the corridor is a painstaking process because securing each of the 26 plots requires local knowledge and often lengthy negotiations.

Parcels 16 and 25 are the latest plots to be protected thanks to WLT, adding to Parcel 15, which was purchased in March 2015. Dr Isabelle Lackman, Co-Director of Hutan has recently confirmed that the owner of property number 21 has agreed to sell, which means another section of the corridor will soon be protected.

In 2014 eight properties were saved: 8, 9, 10, 11, 14, 16, 25 and 26. Sabah Wildlife Department (SWD) is in the process of applying to convert these eight parcels into Lower Kinabatangan Wildlife Sanctuary. SWD’s application was submitted to the Department of Lands and Surveys in mid-April 2015 and will be examined by the Kinabatangan District Land Utilisation Committee at a future date.

Keruak is the third corridor in Sabah created with funding from WLT since 2008. In due course, title to all land in the corridor will be gazetted into Lower Kinabatangan Wildlife Sanctuary.

World Land Trust supports conservation work in Borneo through the Keepers of the Wild programme, funding the salary of ranger Berjaya Elahan.