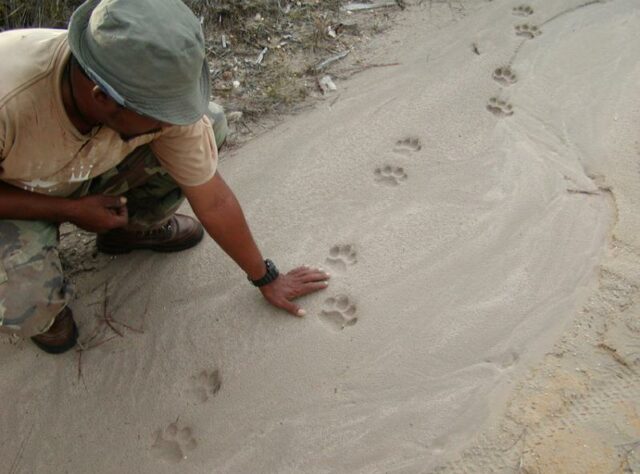 Rio Bravo Conservation Management Area covers more than 250,000 acres (100,000 hectares) of tropical forest in Belize, but there are no trail cameras on site to monitor the reserve’s more elusive residents – Jaguar, Puma and Ocelot.

Automatic cameras with sensors to detect movement are now an essential part of wildlife monitoring. Most wild animals are wary of humans. Top predators in particular tend to avoid all but the most inaccessible and undisturbed parts of a reserve, and it is in these areas that trail cameras come into their own.

Once installed, the cameras need only periodic checking and maintenance. For weeks if not months at a time, the cameras can be left to do what they do best, recording wildlife in places far from human habitation and activities.

“World Land Trust began life in Belize and so did I, and I want to give something back.”
Christina Ballinger, WLT Head of Communications & Marketing

“World Land Trust began life in Belize and so did I,” said Christina, “and I want to give something back.”

To celebrate her 50th birthday, Christina is revisiting Belize in November 2015. While there, she will spend six nights in the reserve and present the trail cameras to PfB staff.

In 1989, WLT launched its first ever fundraising campaign in Belize. This was the first ‘buy an acre’ initiative, and WLT swiftly raised the funds urgently needed to save 110,000 acres (44,500 hectares) of threatened tropical forest in Belize.

Following that initial land purchase, other areas of forest were donated and today PfB owns and manages 252,000 acres (100,000 hectares).

The cameras have kindly been supplied by Bushnell at a discounted price.