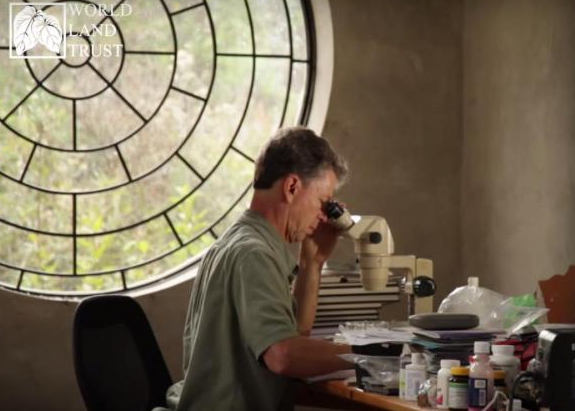 High in the forest of the central Ecuadorian Andes, botanist Lou Jost is using orchids to map microclimates.

Lou is an orchid expert and co-founder of Fundación EcoMinga, one of the four Ecuadorian conservation partners of World Land Trust (WLT). For two decades, Lou has explored the forests of the eastern Andes of central Ecuador, studying orchids and mapping concentrations of unique orchid species.

On a recent visit to WLT’s headquarters in Halesworth, Suffolk, Lou described how mapping the locations of particular orchids allows him and his team to identify particular microclimates.

“Orchids are some of the fussiest, finickiest plants you can imagine because they grow not in the soil but up in the trees. Their roots don’t have a lot of soil to protect them from drying out,” he said. “They are very sensitive to small differences in microclimate from one mountain to the next.”

And the good news is that other rare species are thriving alongside the orchids. Lou explains: “What we’ve found so far is that those areas that are flagged by these special orchids, very often they have also new species of frogs, new species of trees, new species of other plant.”

The cloud forest where these orchids are found is the focus for WLT’s Forests in the Sky Appeal. The appeal aims to raise funds to purchase threated habitat to protect a biological corridor between Ecuador’s Sangay and Llanganates national parks.

During Big Match Fortnight, all donations to the Forests in the Sky Appeal will be doubled thanks to match funding pledged in advance by a small group of generous donors.