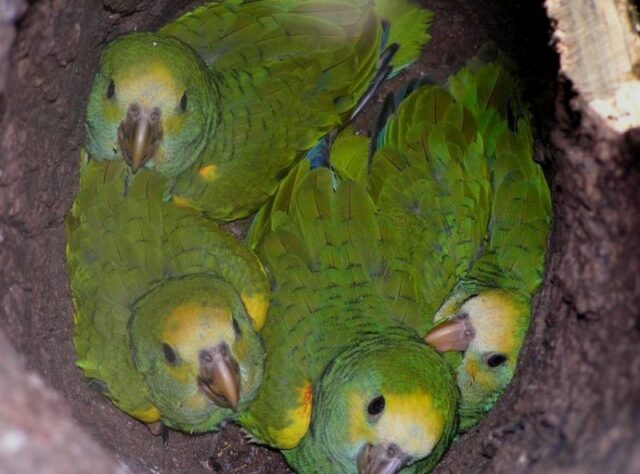 It has been a good year for Yellow-shouldered Parrots nesting in the dry forests of Venezuela’s Margarita Island.

This success is in large part due to the efforts of wildlife ranger Pablo Millán, whose job it is to guard the nests from poachers who regularly attempt to steal chicks to supply the illegal pet trade.

Ranger Pablo is employed by Asociación Civil Provita (Provita), a Venezuelan NGO that has been working in partnership with WLT since 2008. He is supported by WLT’s Keepers of the Wild programme. Since the beginning of the breeding season, Pablo and fellow rangers have been guarding the nest site round the clock and their efforts have paid off.

In May, Provita confirmed there were 97 hatchlings in 30 nests. “The 97 chicks that fledged represent a historic record for the Margarita Island’s Yellow-shouldered Parrot management project,” said Marianna Domínguez, Provita’s Project Manager.

Of the 97 fledglings, 71 were ringed which will help Provita’s future monitoring of the species. “We were only able to band 71 of the 97 chicks because the location of some nests makes it difficult to reach them without disturbing the birds too much,” said Marianna.

Classified as Vulnerable by IUCN, the Yellow-shouldered Parrot (Amazona barbadensis) is one of Venezuela’s most threatened birds, constantly at risk from thieves and an abundance of natural predators. To protect important habitat for the Yellow-shouldered Parrot, WLT raised funds in 2009 to help create the Chacaracual Community Conservation Area, which covers 1,809 acres (732 hectares).