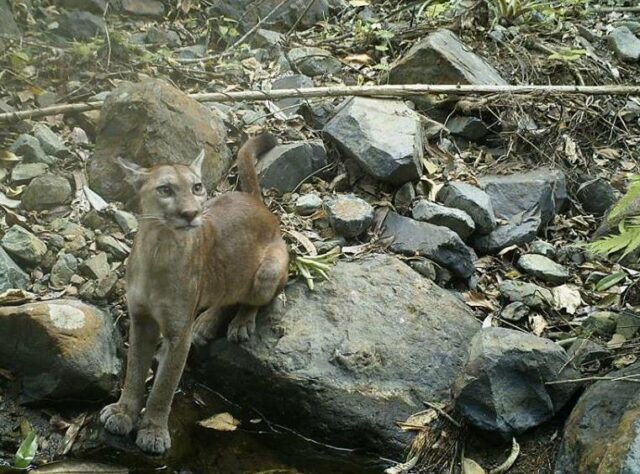 In Ecuador, Fundación Jocotoco has captured a stunning image of a Puma in Jorupe Reserve (pictured right). In Mexico, a remote camera filmed a Puma just 26 days after GESG installed three trail cameras in a reserve in Sierra Gorda.

Also recorded by the same cameras in Sierra Gorda were a Central America Red Brocket (Mazama temama) and a Collared Peccary (Pecari tajacu).

Although Pumas are thriving in Sierra Gorda and Jorupe, elsewhere in Central America, they are not so safe. In Honduras, for example, locals and conservationists were dismayed at recent reports that a Puma was killed by hunters in the Volcán Pacayita area. Pumas are rare in Honduras and it is thought that the Puma in question had ranged from across the border in Guatemala.

Although classified as Least Concern by IUCN, Pumas wherever they occur face threats from hunting and loss of habitat. Incidents such as this highlight the importance of rangers who help to monitor and protect the species found in reserves.

Through the Keepers of the Wild programme WLT funds the employment of rangers working with all three of these conservation partners. A key activity carried out by rangers is the placement and maintenance of camera traps in the reserves.