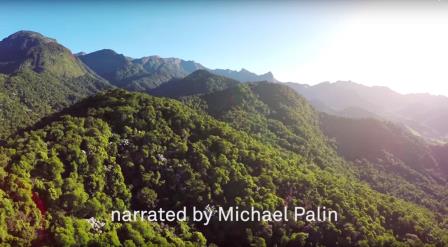 Television presenter Michael Palin has shown his support for Reserva Ecológica de Guapi Assu (REGUA) by narrating a film to highlight the vital role played by REGUA in conserving the Atlantic Forest in Brazil.

REGUA has been a conservation partner of World Land Trust (WLT) since 2005, and over the past decade WLT has funded a tree planting programme, land purchases to extend the reserve and the employment of rangers.

Only 7 per cent of the Atlantic Forest remains, most of which consists of isolated fragments. Clearing forest for cattle ranching and illegal logging is an ongoing problem for this threatened habitat and the film emphasises the need for reforestation. The REGUA team has planted 280,000 trees, and plans to establish 90,000 more by the end of 2015.

“If we want better soils, if we want clean air, if we want quality water, we have to restore forests, we have to plant trees, this is how nature works.” Nicholas Locke, REGUA President

In the film REGUA President Nicholas Locke describes the importance of planting trees: “If we want better soils, if we want clean air, if we want quality water, we have to restore forests, we have to plant trees, this is how nature works.”

The film illustrates the spectacular biodiversity of the reserve. With more than 470 species of bird and 55 species of mammal, this centre for endemism boasts species found nowhere else on Earth.

Other aspects of REGUA’s work featured in the film include the role of scientists, rangers and other REGUA staff, the involvement of the local community and the reserve’s ecotourism programme.

REGUA is currently seeking funds to buy land to expand the reserve, which is situated 80 kilometres north east of Rio de Janeiro in Brazil in the Serra dos Órgãos Mountains.

WLT supports the on-going protection of the Guapi Assu Reserve through the Keepers of the Wild programme.

WLT has recently launched Keepers of the Wild 2020, an appeal to raise £750,000 to guarantee WLT’s ranger support programme until 2020.