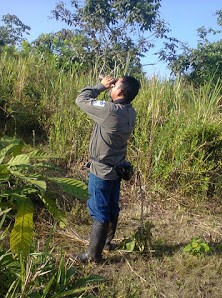 Armando’s work is funded by World Land Trust (WLT) through the Keepers of the Wild programme. Cerro Blanco Protected Forest, where Armando works, is managed and part owned by Fundación Pro-Bosque (Pro-Bosque), one of WLT’s four partners in Ecuador.

The macaws arrived around 6.30am and stayed for approximately two hours, after which they flew off in the direction from whence they came. They visited an area of the forest where Pigio trees (Cavanillesia platanifolia) are common. While they were in view the birds stayed close to the ranger station, perched in a Pigio tree. Similar behaviour was observed when the macaws returned a week later.

The fact that there were five Great Green Macaws in a flight cage near the sighting may have attracted the wild macaws. During the time that the wild macaws were being monitored, they were constantly calling, and their calls were answered by the birds in the flight cage. This bodes well for when the captive bred macaws are released.

“Thanks to World Land Trust’s Keepers of the Wild programme, the important work of Ranger Armando Manzaba is supported, including the care and upkeep of a group of Great Green Macaws in the process of being habituated before being released back into the wild,” said Eric Horstman, Chief Executive of Pro-Bosque.

Macaws are usually present in Cerro Blanco during the months of June to October, when they search for nesting areas in areas of the forest dominated by Pigio trees. Later, when the eggs hatch and the young fledge the Great Green Macaws leave these areas and range widely through the remnant forest patches of the Cordillera Chongon Colonche which form part of a biological corridor linking them with the Cerro Blanco Protected Forest.

Armando photographed the Macaws on 8 July 2015. 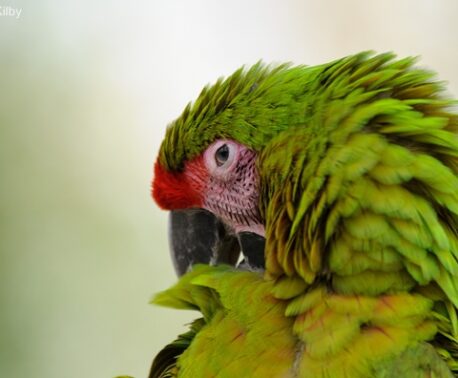 Following the release of five Great Green Macaws into the Ecuadorian Dry Forest of Cerro Blanco Protected Forest, Keeper of …