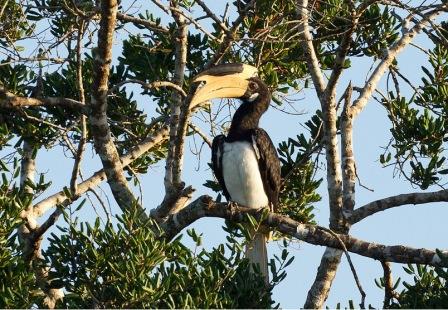 AERF works with local communities to conserve privately owned forests by establishing projects which derive an income from standing forest rather than an income from felling forest.

Educating communities about the value of biodiversity is a priority for AERF. “It is imperative to engage local communities in conservation activities and to work with them to develop income based on the sustainable use of forest resources,” said Jayant Sarnaik, AERF joint Director, on a recent visit to WLT offices in Halesworth, Suffolk.

Conservation in the Western Ghats

AERF’s work is primarily focused in the north Western Ghats, a biodiversity hotspot located in the mountain range running parallel to the entire western coast of peninsular India. This unique topography and climate supports immense biodiversity, including up to 1,700 plants and 350 animal species endemic to the region.

AERF pays particular attention to sacred groves: old growth forest that is traditionally protected by local communities in reverence of a deity. These sacred groves shelter many plant and animal species of conservation significance. Almost every village in the north Western Ghats has at least one sacred grove, ranging from just a few acres to hundreds of acres. Together, these groves create a network of physically disconnected forest patches which are linked by seed dispersal by birds such as the Great Pied (Buceros bicornis) and the Malabar Pied Hornbills (Anthracoceros coronatus).

Mass deforestation has resulted in the loss of old-growth forests and thereby affected nesting and feeding of the hornbills. Through their hornbill project, with the Great Pied Hornbill and Malabar Pied Hornbills as flagship species, AERF aims to promote the conservation of important plant areas such as sacred groves as well as rare and endemic tree species

Increased pressure for subsistence agriculture is threatening the integrity of these sacred groves. In response to this, AERF launched India’s first ever incentive based conservation initiative – Malki Jungle Suraksha Scheme – for conservation of forests on private lands. This project successfully protected 125 acres (50 hectares) of privately owned forest and the project has now been replicated. To date, 2,475 acres (1,000 hectares) of forest have been protected in ten villages, and more than 6,000 saplings, comprising 28 indigenous species, have been planted to restore degraded areas.

“World Land Trust is looking forward to forging a strong partnership with AERF, working together to bolster and replicate their conservation work in the Western Ghats,” said  David Wright, WLT’s Head of Programmes.