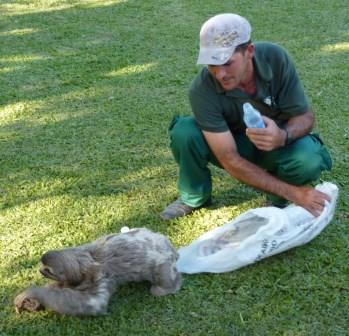 World Land Trust (WLT) has launched an appeal for £750,000 to fund WLT’s wildlife ranger programme (Keepers of the Wild) until 2020.

WLT’s Keepers of the Wild programme has been running since 2011. The programme is extremely successful because it enables WLT’s network of international conservation partners to employ rangers to monitor and protect reserves supported by WLT.

WLT’s primary goal is to raise funds to create nature reserves in partnership with overseas conservation partners. Ultimately the ownership of the reserves is vested in WLT’s partners who take on the responsibility of protecting the reserves and the wildlife they contain.

WLT recognises that protecting large areas of land can put a strain on partner organisations, who are limited by the number of people they have the funds to employ. The Keepers of the Wild programme helps relieve this pressure by providing support for vital protection of these vulnerable habitats.

Ranger duties cover a range of tasks such as patrolling the reserve to police illegal activities such as logging,  hunting and other activities; monitoring species and assisting research teams; creating and maintaining paths; acting as guides for visitors and working with local communities.

The Keepers of the Wild programme forms a key part of WLT’s conservation strategy, and WLT’s long term aim is to link a Keeper of the Wild to any new reserves created with WLT funding, that cannot be patrolled by an existing ranger.

Until now WLT has to seek funds to sustain the programme on a year by year basis. The purpose of the Keepers of the Wild 2020 Appeal is to create a fund to support the programme for a five year period.

WLT’s partners have praised the programme, a selection of their views follow:

“Declaring a reserve is the easy part of the creation of any protected area, the hard part is what begins just after that. Ensuring that land is really protected requires full time dedication. Keeping poachers and loggers out, preventing fires, checking on the health of the ecosystem and its species, allowing people to connect with nature, are just some of the duties behind real conservation, and they just couldn’t happen without a dedicated staff of rangers. WLT’s Keepers of the Wild Programme ensures that all the fantastic protected areas that WLT has established around the world, count on rangers to carry real conservation, every day.” (Bibiana Sucre, Executive Director of Asociación Civil Provita in Venezuela)

“Keepers of the Wild is a wonderful programme, directly meeting the needs of key personnel within protected areas. It is a personalised programme supporting human resources, and rangers identify with the programme and feel a greater obligation to carry out their work in the best way possible.”  (Germanico Barrios, Ecotourism and Marketing Manager of Fundación para el Ecodesarrollo y la Conservación in Guatemala)

“The programme provides crucial support for Fundación Jocotoco to continue with its conservation efforts and accomplish its mission to protect threatened bird species and their habitats. Like many NGOs, Jocotoco has limited operating resources, so the support of the Keepers of the Wild programme has enabled us to increase the number of rangers in key reserves, resulting in a better patrolling and protection capacity. Keepers of the Wild rangers also collaborate to maintain good relations with communities and stakeholders around the reserves. The programme has also funded better equipment for rangers, which has facilitated the monitoring of species of flora and fauna, and important recordings of rare species.  Moreover, being part of the Keepers of the Wild programme has become a motivation for our rangers, increasing their commitment to conservation.” (Carolina Arroyo, Director of Strategic Relations of Fundación Jocotoco in Ecuador)

“Thanks to the support of World Land Trust and Keepers of the Wild, the important work of the ranger Armando Manzaba is possible. His work includes the care and upkeep of a group of Great Green Macaws in the process of being habituated before being released back into the wild.  Armando has also documented with his cell phone a new species of frog for the Cerro Blanco Protected Forest as well as the presence of a flock of six wild macaws.” (Eric Horstman, Executive Director of Fundación Pro-Bosque, Ecuador)

“The Keepers of the Wild are essential to maintain the wildlife areas that we protect with the support of World Land Trust in the private reserves of Sierra Gorda. They are our eyes and hands in the field, they maintain contact with the surrounding community, and their involvement and solidarity with biodiversity is ever growing.” (Roberto Pedraza Ruiz, Technical Officer of Grupo Ecológico Sierra Gorda. Mexico)

You can help support rangers by donating to WLT’s Keepers of the Wild programme.