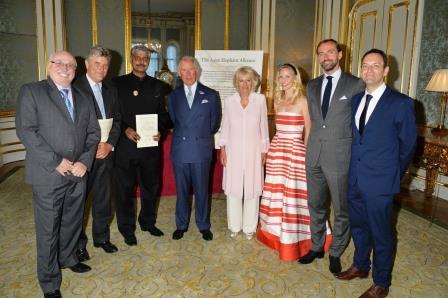 World Land Trust (WLT) is one of five signatories to a new fundraising alliance that aims to raise £20million to ensure the future survival of wild Asian Elephants in India.

The alliance was launched at a Royal Rickshaw Reception hosted by Prince Charles and Camilla, Duchess of Cornwall at Lancaster House on 30 June. WLT’s Chair of Trustees Simon Lyster signed the founding agreement on behalf of WLT.

Bringing together five international conservation organisations with a common goal to save Asian Elephants, the alliance is the brainchild of Vivek Menon, Executive Director of Wildlife Trust of India (WTI).

Elephant Family, International Fund for Animal Welfare and IUCN National Committee of The Netherlands are the three other members of the alliance. Prince Charles and the Duchess of Cornwall are both patrons of Elephant Family, which co-organised the gala event with the Quintessentially Foundation.

India is home to just over half the world’s wild Asian elephant populations, which are thought to number some 50,000 worldwide. The Asian elephant is classified as Endangered by IUCN and requires immediate conservation assistance. But, every day people and elephants in India die as the conflict for space becomes more intense.

The shared vision of members of the Asian Elephant Alliance is a safe and certain future for the wild elephants of India. The alliance aims to raise £20 million to secure 100 corridors across India by 2025 for 30,000 Asian Elephants.

“For more than a decade WLT has been working with WTI to fund the protection of elephant corridors in India to keep elephants and people separate and safe. I am delighted that WLT is joining forces with other conservation organisations to raise funds and to keep the plight of the Asian Elephant in the public eye,” said John Burton, WLT’s Chief Executive.

During the evening event an auction of 20 designer-decorated auto-rickshaws raised more than £700,000 for Elephant Family.

You can help save Asian Elephant in India by donating to WLT’s Indian Elephant Corridors appeal.

You can also support the appeal by tweeting with the hashtag #EleAlliance.