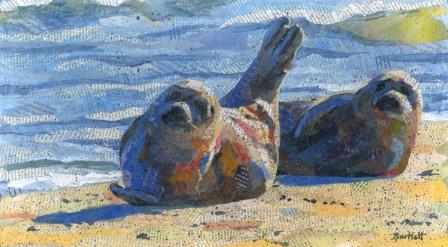 Wildlife artist Paul Bartlett has donated £1,278 to World Land Trust (WLT) following his Back to Nature exhibition at the Scottish Ornithologists Club in Aberlady.

The exhibition ran from 3 April until 20 May 2015. “Paul pledged to donate all profits from the sale of originals to a worthwhile conservation project, and we are delighted that he ultimately chose World Land Trust. We love his artwork and congratulate him on the success of his exhibition,” said Viv Burton, WLT’s Head of Communications.

Paul spoke about the motivation behind the donation: “The exhibition was called Back to Nature because all profits were being paid back to nature as a thank you from me for enabling my lifestyle over the past 13 years. Over the years of being a wildlife artist I’ve donated artworks for charity auctions as well as prize money for competitions won but this year I wanted to set the example and make a real difference, hence the exhibition.”

Paul’s innovative use of collage techniques has gained him acclaim in the world of wildlife art. His experimentation with ripping and papier maché to create textural pieces, as well as his use of pertinent texts for collage, has led to him winning numerous awards for his work.

A scientist with a passion for wildlife, Paul seeks the more remote wildernesses for his inspiration, often spending days trekking alone to visit inaccessible coast or islands.

Since its inception in 1989 WLT has always had strong connections with art, and has been the beneficiary of works donated by many different artists. The first artist to support WLT was Bob Linney who designed the poster for the Trust’s founding project, Programme for Belize. In 2011 WLT opened an art gallery on the ground floor of its offices in Blyth House.