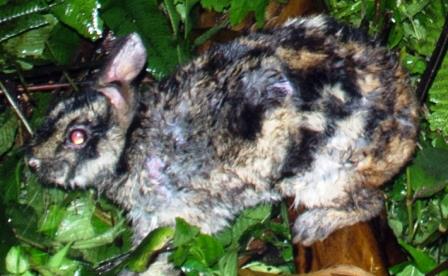 The sighting of an Annamite Striped Rabbit (Nesolagus timminsi) in north-central Vietnam by a University of East Anglia (UEA) research team is a promising sign for World Land Trust (WLT)’s conservation work in Khe Nuoc Trong.

Discovered less than two decades ago the Annamite Striped Rabbit’s range is confined to the Annamite mountains on the Laos-Vietnam border. Together with three other species listed as Critically Endangered by IUCN, Saola (Pseudoryx nghetinhensis), Chinese Three-striped Box Turtle (Cuora trifasciata) and Sunda Pangolin (Manis javanica), the rabbits are resident in Khe Nuoc Trong forest where WLT is running a Carbon Balanced project.

The rabbit was held and photographed by Sarah Woodfin, a researcher from UEA. Sarah had set out on a three-month expedition to track the recently-discovered rabbit and study its habitat as part of her Masters in Applied Ecology and Conservation.

The Annamite Striped Rabbit was first documented by rabbit expert and WLT Council member Dr Diana Bell and colleagues from UEA’s School of Biological Sciences in the journal Nature in 1999.

Since then there have been very few sightings of the rabbit and so little is known about it that it is classed as Data Deficient by IUCN.

Sarah has become the first researcher to hold the Annamite Striped Rabbit and spoke about her excitement at encountering the rabbit on the first night of their trip: “I didn’t expect that I would ever see one up close. I thought that if I was very lucky, I might see one from a distance in the forest. I certainly never expected to have the opportunity to hold one of these magnificent little animals. I was utterly delighted and completely awed by the encounter.”

The team took measurements and photographs before releasing the rabbit back into the forest.

The UEA research project is funded by Thrigby Hall Wildlife Gardens, a long-time supporter of WLT through the Wild Spaces programme.

WLT is supporting conservation in Khe Nuoc Trong in partnership with Viet Nature Conservation Centre (Viet Nature), with funding from the Carbon Balanced programme. Khe Nuoc Trong is one of Vietnam’s richest areas of biodiversity and one of the best remaining tracts of annamite lowland forest.

The conservation project designed by WLT covers 49,420 acres (20,000 hectares) and aims to conserve the lowland forests of north-central Vietnam, protecting it from hunting and illicit timber extraction.

WLT funds rangers in Khe Nuoc Trong as part of the Keepers of the Wild programme.