Kites Hill is a haven for wildlife SEARCH NEWS 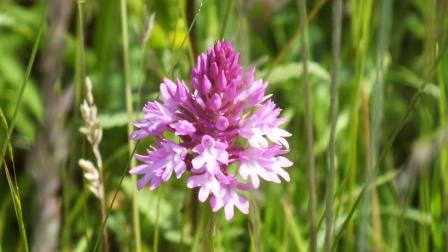 The only reserve owned by World Land Trust (WLT) is providing a wildlife sanctuary for insects and amphibians, mammals and birds.

Kites Hill was bequeathed to WLT by Jane Pointer as a living legacy in 1999. Combining woodland and farmland, Kites Hill offers a range of habitats in a relatively small area – 40 acres (16 hectares) – within just a few miles of the city of Gloucester.

During a recent site visit to Kites Hill, Charlotte Beckham WLT’s Conservation Programmes Co-ordinator recorded Broad-bodied Chaser (Libellula depressa) and other species of dragonfly and damselfly by the pond and in the hay meadows. She also noted Common Frog tadpoles (Rana temporaria) and tiny newts. Sheltering in a remote corner of the reserve was a family of Roe Deer (Capreolus capreolus), a female with two young.

“The reserve is absolutely buzzing with life,” said Charlotte after the field trip. “I’ve never seen so many tadpoles in the pond, the hay meadows are full of invertebrates, and it’s great to know that Roe Deer are breeding at Kites Hill.”

With their rich mix of grasses and wild flowers, hay meadows offer an important habitat for insects and birds. At Kites Hill the meadows are now kept unimproved (with no applications of fertiliser) to reduce the impact of competitive grasses and to allow wildflowers to thrive.

The meadows are managed to Soil Association organic standards by local farmer Michael Drake. On the advice of WLT, hay is cut in late July, which gives flowers time to set seed, providing a food source for birds and ensuring annual flowers will bloom again the following year.

In the spring, visitors to the reserve see Cuckoo Smock (Cardamine pratensis), which is an important habitat for Orange-tip (Anthocharis cardamines) butterflies which lay their eggs on the flowers. On the recent field trip, the fields were full of Meadow Buttercup (Ranunculus acris), Pyramidal Orchids (Anacamptis pyramidalis) and Meadow Brown butterflies (Maniola jurtina).

The loss of hay meadows in Britain during the 20th century war has had a disastrous effect on native wildlife and World Land Trust is committed to conserving hay meadows at Kites Hill.

After the Second World War, farming practices intensified. Farmers removed hedges to increase field size and accommodate larger machines. Hay meadows were ploughed up for arable crops and grassland productivity was improved with fertilisers, rye grasses and clover. Rather than cutting hay once a year, making silage throughout the year became the norm. By 1984 the total area of meadowland was estimated at just 3 per cent of the 1930 level – which makes the conservation of hay meadows at Kites Hill all the more important.

WLT manages conservation at Kites Hill in partnership with The Conservation Volunteers.

Kites Hill is near Painswick in Gloucestershire, adjacent to the National Trust property of Pope’s Wood. The entrance to the reserve is by a gateway on Portway, off the A46 between Painswick and Bentham. The reserve is open all year round and there is no charge.

You can support conservation at Kites Hill by donating to World Land Trust’s Action Fund and specifying Kites Hill in the comments box of the online form.