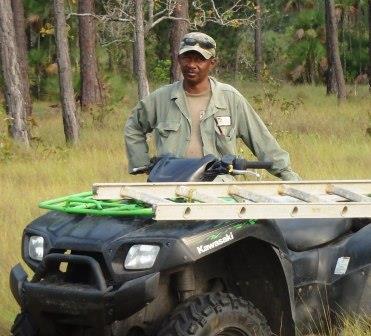 Ranger Albert Tucker is a ranger employed by Programme for Belize (PfB) with funding from the Keepers of the Wild programme of World Land Trust (WLT). His work is risky and dangerous – but absolutely essential for the protection of forest and species.

Albert is responsible for preventing illegal activities in the south eastern part of PfB’s Rio Bravo Conservation Management Area (RBCMA). Among other duties he protects the nests of the Yellow-headed Parrot (Amazona oratrix belicensis), a Belizean subspecies.

RBCMA is a stronghold for the Yellow-headed Parrot but the species is a target for criminals who steal fledglings to supply the illegal caged bird trade. During the most recent breeding season, Albert and other rangers monitored 43 nests. Thanks to regular patrols, 32 breeding pairs successfully fledged young Yellow-headed Parrots although poachers stole chicks from 11 nests.

The reserve’s biggest challenge is illegal logging. In 2014 the rangers dealt with 16 unauthorised logging activities. This resulted in the confiscation of large volumes of mahogany and the seizure of a tractor. Crimes are now occurring at night, which presents an even greater risk to the rangers on night patrol.

Illegal marijuana cultivation also presents a high level of risk to the rangers. In 2014, aerial patrols coordinated with the Belize Defence Force and the police resulted in two marijuana fields being destroyed, along with 3,500 marijuana plants, 400 pounds of processed marijuana, 70 pounds of seed and a camping hut.

Forest fire is another threat in RBCMA and the rangers remain vigilant. Last year, Albert and fellow ranger Ivan Gillet detected eight fires, all which were quickly suppressed. As a result of the rangers’ quick reactions, no broadleaf forest or pine savanna was lost to fire during the year.

Throughout 2014, Albert and Ivan conducted 105 patrols in hot spots of the RBCMA, carrying out their patrols on foot, by car and by boat. They were involved in the maintenance work at Hill Bank Field Station and they carried out minor repairs to roads in the reserve.

Without rangers like Albert, reserves created with funds from WLT would be unprotected. You can support Albert in his work by donating to World Land Trust’s Keepers of the Wild programme.