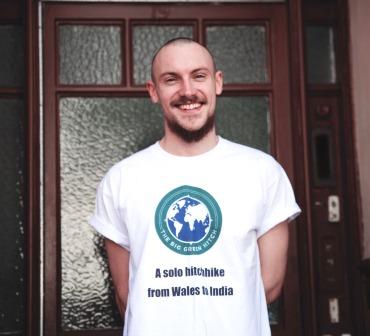 Chris Beard is setting off on a solo hitchhike from Wales to India to raise money for World Land Trust (WLT). His journey starts in July and along the way he will be trying to uncover some of the environmental issues we all face.

On the four month trip Chris will travel through 10 different countries. This isn’t just a hitchhiking trip – he sees it as a way of getting to know the environmental challenges faced in the countries he is visiting and as well as talking with local people he will be making contact with conservation groups and looking at their projects.

“I wanted to do something not only for myself but also to give something back. I discovered World Land Trust and after some good reading I realised it was the charity that I wanted to raise money for,” he told us.

Although Chris will use cars to get around, he will not be directly adding to the world’s carbon emissions because by hitchhiking he is sharing lifts with people that are already on the road.

A filmmaker and photographer, Chris will be documenting his journey and highlighting issues facing the natural world. Track his progress on his website or by following him on Twitter.

As well as inviting sponsors on JustGiving, Chris has been raising money by doing odd jobs and hosting a nacho stand at local markets.

You can sponsor Chris on his JustGiving page.