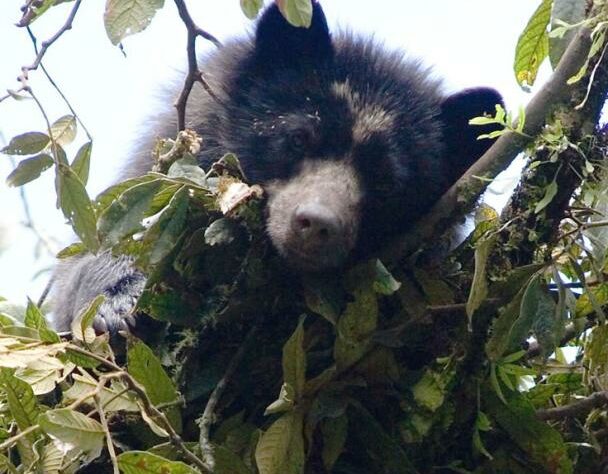 Silvio Calderon, a Keeper of the Wild funded by World Land Trust (WLT), came face to face with a Spectacled Bear in Yanacocha Reserve. The reserve is owned and managed by Fundación Jocotoco, one of the Trust’s four conservation partners in Ecuador.

Silvio was on a regular patrol in the hummingbird garden when he found himself closely observed by a Spectacled Bear on the path. The incident happened so quickly that he didn’t have time to photograph it, but it was nonetheless an excellent record of the species.

The sighting is great news for the species which is classified by IUCN as Vulnerable. The Spectacled Bear (Tremarctos ornatus) is the only bear found in South America. The bear’s habitat is gradually diminishing, threatened by road building, the expansion of farming and the spread of human settlements. The bears are omnivorous and are often hunted after damaging crops such as maize.

Silvio has been involved in the design of the gardens at the centre. He continues adding new species to generate more diversity in the gardens and helped dig a pond.

Visitors come daily to the reserve and Silvio has proved to be the best person to handle the registration of visitors and the collection of entry money. In the period from January to March 2015 there were 816 visitors. Of these 237 were registered foreigners, 507 Ecuadorians and 72 children.

Earlier in the year Silvio Calderón and all staff of Fundación Jocotoco joined a workshop to discuss the operation of the reserve in 2015. This workshop was held in Ayampe Reserve and the rangers exchanged experiences among themselves and with representatives of the Agua Blanca community in Machalilla who are involved in community tourism.

Rangers are encouraged to take pictures of activities, people, flora and fauna on the reserve. Silvio and other rangers took part in a photography workshop to learn techniques to help them take better photographs.

The winter has been unusually severe and in recent months landslides caused by heavy rain has blocked some paths. The rangers have not noticed the new pests emerging but the unusual weather patterns have been unmistakeable.

You can support the work of rangers like Silvio, by donating to the Keepers of the Wild programme.