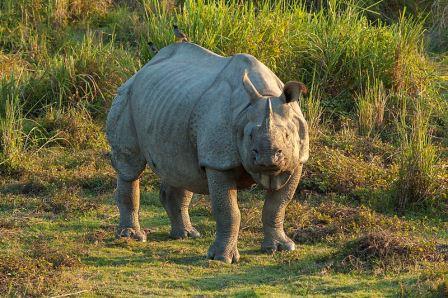 With the country’s security forces focused on humanitarian relief efforts, in the national parks endangered species such as tiger, rhino and elephant are unprotected and vulnerable to poaching.

Generations Trust made the first donation to WLT’s appeal (£10,000). These funds have been channelled to Nepal via Wildlife Trust of India (WTI), WLT’s conservation partner in India. In a concerted fundraising effort, WLT has matched a donation to Nepal’s wildlife relief effort made by the International Fund for Animal Welfare (IFAW).

“World Land Trust is perfectly placed to respond rapidly to crisis situations such as the one in Nepal. We do not have an onerous bureaucracy and we can release funds swiftly in response to requests for emergency aid from our network of long-standing conservation partners,” said John Burton, WLT Chief Executive.

Funds have been used to purchase heavy duty tents to provide temporary accommodation and other equipment for staff of the Department of National Parks and Wildlife Conservation (DNPWC) after the initial earthquake on 25 April 2015 damaged buildings and infrastructure.

Diana Bell, a WLT Council member, initiated the fundraising effort. Procuring the tents was easy, but transporting them from India to Nepal was the problem. Following an introduction from Nigel Collar at Birdlife International, Diana contacted WTI. There, WTI staff were in the process of arranging to send in a relief team with IFAW.

“Our concern is the high probability of poachers going in after tigers, rhinos and elephants in Chitwan National Park and other southern Terai parks during the aftermath of the earthquake.” (Diana Bell, WLT Council member)

“Our concern is the high probability of poachers going in after tigers, rhinos and elephants in the southern Terai parks like the world heritage site Chitwan National Park during the aftermath of the earthquake,” explained Diana, who is Director of the MSc in Applied Ecology & Conservation at the University of East Anglia.

“Because Nepal’s economy is so dependent on wildlife tourism there are humanitarian as well as biodiversity reasons for helping DNPWC,” she said.

Thanks to the cooperation of WTI, emergency relief for anti-poaching measures arrived promptly in Nepal following the first earthquake. Any further requests for financial support from DNPWC will be assessed by WTI and WLT will act on WTI’s recommendation.

This is not the first time that WLT has delivered funds for conservation to an area stricken by a natural disaster. Following the Boxing Day tsunami of 2004, WLT launched the Reef and Mangrove Appeal after conservation partners in India and the Philippines contacted WLT for help with mangrove and coral recovery.

You can support WLT’s Disaster Relief Appeal by donating to the Action Fund (please write Nepal in the comments box).