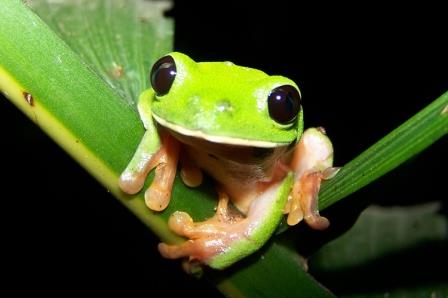 The reserve measures some 2,070 acres (838 hectares) in total, and funding from WLT will purchase an area of 816 acres (330 hectares). The land purchase has been handled by WLT’s conservation partner in Guatemala, Fundación para el Ecodesarrollo y la Conservación (FUNDAECO).

Located in Huehuetenango Department, the reserve is a priority for conservation because it is an Alliance for Zero Extinction (AZE) site, and a vital habitat for endemic and highly threatened amphibians.

The forests of the western highlands of Guatemala are exceptionally biodiverse but population growth and subsistence agriculture are driving deforestation in the region.

Marco Cerezo, Director General of FUNDAECO, explained the significance of the land purchase: “More than 60 per cent of the montane tropical forest of northern Huehuetenango has disappeared within the past 30 years. Conserving the remaining forest is essential if we are to save many critically endangered amphibians from extinction.”

Following the survey FUNDAECO launched its Amphibian AZE Sites Conservation Programme. FUNDAECO is now carrying out conservation actions in four AZE sites nationwide and aims to conserve all 12 AZE sites in Guatemala within the next 10 years.

WLT’s funding for the reserve came from corporate supporter Puro Fairtrade Coffee and a private donor.

Help save more threatened habitat in Central and South America by donating to WLT’s Buy an Acre appeal.